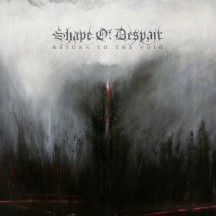 
The void from that artwork sure looks inviting.

Shape Of Despair was the first funeral doom metal band I fell in love with. I was around 15 years old when I first ventured into their discography. Something about the minimalist, abstract nature of the genre drew me in. As I was trying to find a proper starting point, Angels Of Distress made its way into my life. It still packs a punch that is hard to replicate and the title track remains one of the crowning jewels of the genre for me. The bittersweet melodies, the crushing drums and riffs, the female vocals that seem to tear my soul apart and the punishing growls. It was instant love. Nowadays I mostly dive into much darker and extreme branches of doom metal but it’s good to remind myself why I think this band is special.

By the end of the 2000s I feared the band didn’t have much life left in them. After 2004’s Illusion's Play the band merely released an EP in 2010 and very slowly started to work with their 2015 comeback album Monotony Fields (but can you really call it a comeback album if you are just working suuuuper slooow?). I must admit that it was in preparation for this review that I listened to Monotony Fields for the first time. This was for the better though as I feel I can judge Return To The Void with a fresh memory. The line-up remains unchanged since the previous album and truth be told, so does the sound.

All the elements people came to expect and love from these Finns is intact. The desolate drumming has this echo that makes the sound fuller while the guitar riffs and leads are warm and highly emotional. But the two elements that define the band the most are the vocals and synths. The painful tone of the monstrous growls is bitter beyond belief and the angelic female choirs are simply divine. Like the voice of the angel that will carry your soul to the afterlife. These chants are heavily manipulated but the effects on the clean vocals make them sound heartfelt instead of artificial. Otherworldly beauty. The synth work is mostly responsible for the celestial, “sweet” sound the band is known for and oh boy do they know how to capitalize on it. The classical elements give this album a cinematographic touch. Maybe it’s just me projecting my worries but to me the timing of this release is incredible. Return To The Void is a fitting soundtrack for a beautiful world now ravished by mankind’s foolishness. The suggestive artwork (I mean… c’mon) coupled by the album’s title make me appreciate this music for its nostalgic tone. A yearning for more peaceful, innocent times. A yearning for the void.

While the product doesn’t change the formula from previous albums, only they can bring up the feels like they do. The key to unlock this emotional response is immersion though. Music like this can only be fully enjoyed when the listener is instantly hooked by the album’s sound and intent. Otherwise there is a risk of the album sounding too simplistic as Shape Of Despair work to enhance the atmosphere they create with careful moderation rather than display a vast palette of sounds. Fortunately the album is short enough (by funeral doom standards) that it doesn’t overstay its welcome too much.

Shape Of Despair have once again demonstrated why they are still a relevant act within the funeral doom metal scene. The seekers of melodies most sorrowful and haunting will find them aplenty. As for those who have never ventured into this band or genre: This is as good a start as it can get.