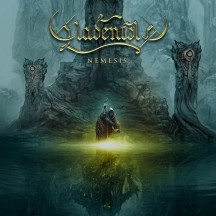 
I don’t really review power metal, so when an album compels me to do so, I feel like that’s a pretty strong indication of its quality.

Gladenfold are a six-person band from Finland, and they don’t seem to have been the most prolific; we have 2003 as their formation date in our database, and yet Nemesis is but their third full-length record. Still, their speed seems to be increasing, as Nemesis comes only three years after When Gods Descend. Perhaps they realized that they were onto a good thing and that it made sense to capitalize on it, as Nemesis is probably the power metal album I’ve been most strongly taken by since perhaps 2017’s Gunmen by Orden Ogan.

If I was to describe Gladenfold based on this sound of this album, I’d class them as a slightly proggy symphonic Europower band with melodeath elements. Some might reply and say ‘isn’t that just extreme power metal?’, and one could quite easily refer to this album with that term. However, when I think of extreme power metal albums, I think of albums where those ‘extreme’ elements (i.e. the harsh vocals, the more aggressive drumming) are persistent features throughout, like on Children Of Bodom or Kalmah records. On Nemesis, the overriding sound is driven by melodic vocals and melodic instrumentation, with regular sections of melodeath intensity introduced at opportune moments.

Those opportune moments appear more frequently in the first couple of songs; “Carnival Of The Hunter” fluidly interchanges between straightforward power metal energy, melodeath raspiness and symphonic bombast, while “Chiara’s Blessing” makes use of blast beats quite early on. After the first of several acoustic-dominated power metal ballads on the album (all of which are surprisingly decent), “Saraste”, those harsh vocals and more aggressive instrumental sections move towards the background, only appearing when Gladenfold wish to nudge the intensity at a pivotal section of the song, with a few screams late in “Revelations” and a unexpectedly ballistic symphonic black metal outburst midway through “Tapestry Of Creation”. Ultimately, I feel Gladenfold have a good grasp on how to balance the power metal and melodeath aspects; they’re more than strong enough on a purely melodic level to be able to rely on the power metal as their primary form, but having that wider range gives them more room to take songs in different directions as best suit them, much like a band such as Paladin can.

As far as references for how their power metal sounds, I feel I was most consistently picking up hints of Kamelot and Seventh Wonder, as frontman Esko Itälä takes more than a few cues from Tommy Karevik. However, there’s also moments that bring to mind Serenity or Pagan’s Mind, and the keyboards at the beginning of “Chiara’s Blessing” will immediately make one think of Nightwish or Children Of Bodom. Gladenfold know some good bands to take inspiration from, as the end result is one that can flirt with cheesiness in its more dramatic symphonic moments, but that at the same time has a depth that rewards repeat listens. What’s more, the group really know how to write memorable hooks, particularly in terms of choruses; the melodeath-power metal exchange in the chorus of “Carnival Of The Hunter” makes an immediately positive impression, as does the rapid-paced intensity of the key moments in “Chiara’s Blessing”. Later on, “Solitude’s Bane” is pure flower power metal bliss with the soaring vocal melodies, while “Gloria Eternal” makes for a full-blown dramatic conclusion to the album.

Unfortunately, “Gloria Eternal” isn’t the actual conclusion to the album, as “Where Mountains Mourn” finishes the album off with a 6-minute piano ballad; maybe some people will dig that, but I feel like if you’re going to round out an album that spends most of its time flying along in a pacey mixture of cheese and venom by playing it lowkey, maybe make it a bit shorter. Still, on the whole I’d say that Nemesis is an obvious recommendation to any power metal fans that are not averse to some melodeath fingers in their pie.

Written on 07.05.2022 by
musclassia
Hey chief let's talk why not
More reviews by musclassia ››