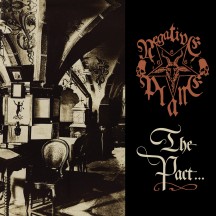 
Negative Plane is part of that power which eternally wills evil and eternally works good.

I got into Negative Plane pretty late, only finding out about them through the Funereal Presence project of drummer Bestial Devotion, and Achatius was released in 2019, so that’s pretty recent (I am not omniscient, but I know a lot). And at that time I also interviewed him and asked about progress on the upcoming Negative Plane record. Considering that the album was initially planned for a 2015 release and the answer was “There's some material”, I wasn’t very confident that I’d see that material actually finalized anytime soon. Now that The Pact… is here, I can clearly see why this was one of black metal’s most anticipated albums. Eleven years. God help us, for art is long, and life so short.

And this art is pretty long, The Pact… is clocking in at almost an hour, and though the sound it approaches is pretty singular, it never loses track of what it aims to do, and it fills the runtime with a ridiculous amount of riffs. Considering how black metal is the kind of genre that often uses a single riff for all the atmosphere it can possibly create, Negative Plane one again look to the earlier days of black metal, an amalgamation of first wave (mostly) and second wave sounds that sit at the border of thrash and heavy metal. The music is thus at a very distinct genre intersection, sometimes feeling too melodic for black metal and too macabre for either thrash or heavy. But all theory is gray, and what The Pact does is rethreading black metal’s lineage.

This is the first record done by Negative Plane as a four piece, and the extra guitar does make the band make sufficient use of the newfound parallel riffing capabilities. The vocals are the one aspect I could see most people having issue with, and I admit sometimes I’d have preferred to have BD handling some of the vocals instead after hearing them in Funereal Presence, but I guess a man sees in the world what he carries in his heart. BD does offer some additional vocals in the closer, but the one element that felt most surprising was the cello in “The Wailing of the Immured”, an interlude that splits the record quite equally. Other than that, the album is pretty straight-forward in its rotten riff-fest, often bordering on some prog rock structures, though without abusing technicality. Though it’s definitely more concerned with melodies than atmosphere, there’s a very macabre one evoked nonetheless, especially due to some of the additional instrumentation (think bells and organs, fittingly).

The production is about as perfect as I’d want for such a thing. It’s not necessarily raw, at least not to the extent that black metal usually is, but has a vintage quality to it that keeps it from feeling overly polished or inauthentic, all the while letting all the different elements be as audible as they need to be since the mix is about as far from crowded as it can get. So a lot of what makes it remind me so much of that specific era in extreme metal is not just in the shape, but also the very specific sound quality they seem to aim for. So if this album leaves you cold, remember, the Devil is old, grow old yourselves and he’ll make sense.

Who holds the riff, let them hold it well. It will hardly be caught a second time.

Written on 09.05.2022 by
RaduP
Doesn't matter that much to me if you agree with me, as long as you checked the album out.
More reviews by RaduP ››