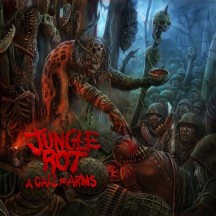 
Rumble in the jungle.

If there was a band who nigh-on guarantees quality with each album, then Jungle Rot would certainly be a contender for that title, producing a run of ten albums that never fail to get your pulse racing and head banging. It is a run that continues with Call To Arms, another collection of their stomping groove-inflected death metal that once again raises the question of how this band does not get more attention than they currently enjoy.

Jungle Rot have made a career out of finding that sweet spot between combining the groove of Obituary with the intensity and power of Kreator, a potent and powerful combination that is well utilized by the band, when combined with their knack for strong song writing. The band’s brand of nihilistic death metal seems more apt by the day, with tracks such as “Total Extinction” being a relevant, if blunt, assessment of the world we live in; the band do at least offer you the curtesy of a riff that will compel you to headbang into oblivion.

From start to finish, A Call To Arms is yet another solid and compelling release by the band, one of those records where you find yourself surprised when it draws to an end, as you then realise you’ve just listened to the album in one go without trying. While the album maintains a high bar throughout, there are moments that stand slightly more to the fore than others, with “Genocidal Imperium”, “Death Squad” and “Population Suicide” being the strongest of the pack. “Beyond The Grave” sees the band tweak the formula slightly, being a track that is mostly a groove track with upbeat moments punctuated throughout; it does seem out of place as the second track but it holds well on its own.

Matrise’s once again delivers, with his hoarse yet menacing tones packing a strong punch alongside the rest of the band. New member Spenser Syphers slots in perfectly, managing to control the carnage while adding little flairs to the songs, with “Maggot Infested” having an almost disco feel to it. The production is geared towards highlighting the band’s strengths, with the guitar tones of Bub and Matrise fitting the band’s approach well yet remaining well placed in the mix to allow other members of the band room to breathe.

That isn’t to say that A Call To Arms doesn’t have its shortcomings, however; as enjoyable as Jungle Rot’s style is, it does tend to meld into one after awhile. with songs like “Haunting Future” being good, but too familiar-sounding to really stand out beyond being an album track. While not a bad thing per se, I find “Asymmetric Warfare” reminds me of Power Trip’s “Executioner’s Axe”, which is unfortunate as it sets the bar too high and it can’t help but feel like a weaker effort in comparison, as it lacks the power and urgency which gave the Power Trip track its charm.

A Call To Arms is a solid album, working best when listened to as a complete record rather than being picked apart and listening to single tracks. Jungle Rot keep their run of strong albums going, running into the double digits with their eleventh album. If you’re a fan of death metal and haven’t listened to the band yet, you could do worse than starting here.

Written on 14.05.2022 by
omne metallum
Just because I don't care doesn't mean I'm not listening.
More reviews by omne metallum ››