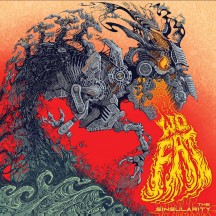 
Bigger is not always better, with Wo Fat’s The Singularity providing evidence of this.

Approaching their 20th anniversary, Wo Fat are no strangers to long albums; their first two full-lengths, The Gathering Dark and Psychedelonaut, clocked in at 78 and 71 minutes, respectively. After that, however, they developed a modicum of restraint, with their subsequent records, including The Conjuring and Midnight Cometh (my previous encounters with the band), all running for 40-50 minutes. However, it’s been 6 years since Midnight Cometh, which was evidently enough time to assemble a colossal body of material, as The Singularity once again breaks the 70-minute mark. As much as I comment on runtimes in reviews, I don’t inherently dislike super-long albums; some of my favourite albums of the past decade challenge the capacity limitations of a CD. However, with such long runtimes, there’s less patience for underwhelming tracks or persistent musical flaws, and both of these stop The Singularity from excelling in the way that it has the potential to.

Funnily enough, like quite a few other albums where I find issue with the runtime, some of the strongest material on The Singularity is found on the longest tracks. Wo Fat are a band that fall squarely into the stoner metal genre, but span a few niches within said genre. Across The Singularity, one can encounter driving desert rock, groovy jams, mellow psychedelic meanderings and heavy doomy riffs. The longer songs are those in which Wo Fat lean more towards the latter elements, and it is in those moments that I can find myself enamoured with The Singularity. “Orphans Of The Singe” has some very lush Elder-esque psychedelia in several sections, as well as some slow, chunky doom riffs, while “Otherworlder” has a smoothly mellow jam intro that is nicely contrasted with a brooding, weighty closing couple of minutes. The longest track on the record is also its crowning achievement; “The Oracle” has lots of serene psychedelic exploration, nasty stoner grooves, extended wild guitar solos, and a big loud outro that shows of everything good about Wo Fat in one song.

There is a lot of quality to be heard on The Singularity; however, in spite of this, I still find myself slightly ambivalent towards it. Part of this comes from the two shorter tracks on the record, “The Unraveling” and “The Singularity”. Both of these, in contrast to the songs I’ve already discussed, are more oriented towards up-tempo desert rock, and part of my decreased enthusiasm towards them may just come from personal style preferences, but I do feel that those sections of the record are also among its weakest moments. These songs aren’t one-dimensional, and when “The Unraveling” evolves into a groovier, cooler jammy second half, I certainly find myself enjoying it. However, I’m still not inclined to recommend this song, because I think it’s perhaps the clearest example of why I consider the vocals to be one of the weaker aspects of The Singularity.

Kent Stump’s vocals aren’t a major problem, particularly considering that the majority of the runtime on The Singularity is all-instrumental, but his slightly nasally half-spoken delivery in verse sections, while par for the course for desert rock stylistically, is not very convincing in its delivery at times. During the chorus of “The Unraveling”, that nasal quality is highlighted by the attempt at singing, which, combined with an unconvincing vocal melody, makes for quite the awkward chorus. It’s the kind of moment that, on a shorter album, one can quickly shrug off, but leaves me internally debating its inclusion on a record that’s already so full of content.

The Singularity is, overall, a very enjoyable album, with some really quality guitar work, whether it’s extended shredding, chunky riffing or psychedelic serenity. Given the range of elements of stoner metal that this record covers, I feel that Wo Fat should probably either write more memorable desert riffs or just scale down their presence in their sound, and the vocals felt like they detracted more often than they added (although their sparsity makes this less of an issue). Potentially one that would have benefited from stricter editing, The Singularity remains a solid return by Wo Fat.

Written on 15.05.2022 by
musclassia
Hey chief let's talk why not
More reviews by musclassia ››