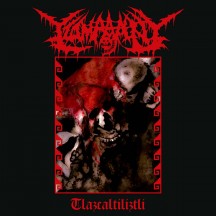 
Some bands nail the sound but struggle with the songwriting.

There is a lot to love about Tzompantli, which is why it’s frustrating to write this review. This is the side project of Brian Ortiz aka Bigg O))), guitarist of Xibalba. This is not the first time Bigg O))) goes rogue and starts a project of his own, though. A year before Tzompantli’s inception, he created Mortuary Punishment (which we covered in our Clandestine Cuts series). There are some similarities, but whereas Mortuary Punishment’s crushing death metal sound leaned a lot on hardcore influences and a bit of doom metal, Tzompantli’s death metal gets more evenly mixed with doom aesthetics, as well as dark tribal and folk touches meant to enhance the project’s Mesoamerican themes.

This is really appealing to me already, as I’m always first in line for extreme metal that focuses on the different indigenous people of the American continent. The intro with menacing percussions, flutes and death whistles is highly effective in setting the mood, and once the first proper track starts, it’s clear where Tzompantli’s strength lies: In the enormous size of the riffs and the impeccable, chunky production that elevates them. There are some fast, punky sections and breakdowns scarcely sprinkled throughout the album that hint at the Xibalba connection. The low grunts complement the bludgeoning nature of the music as well. They lack variation but they are more than servicable. On the ambient-prone track “Eltequi”, the vocals take a big role in conjuring dark visions of human sacrifices. A final intriguing factor are the atmospheric, clean but echoing, lead guitars, which add a little bit of well-needed melody. Once they are combined with fast drumming, like on “Tlamanalli”, you get a sound that recalls the great Disembowelment.

So what’s holding them back? Well, the elements that make this album stand out, like the lead guitars and folk touches, are just that: Touches. Minor elements sprinkled on the album. The bulk of the album consists of mid-to-slow death/doom with some bursts of aggression. That in itself isn’t a problem either. The problem is that this is a death/doom album that’s barely 33 minutes long and yet it feels like it drags on and runs out of steam by the second half. It is a good thing the songs are short, the majority of them 4-5 minutes, because it feels like the project lacks the songwriting chops to actually do that much with the sound they so carefully perfected. Most of the riffs do not differ from each other, and this is even more noticeable during the slower sections. This is an album in dire need of dynamics. Perhaps more emphasis on the folk instrumentations or more variations in tempo and the vocal department could have helped out.

I still have a lot of faith in this project as the sound itself is fantastic. It could have been an excellent 15-20 minute EP. But as it is now, Tlazcaltiliztli feels stretched out. Perhaps it’s better to focus on the actual songs first and then care about the sound? Let’s see about that…