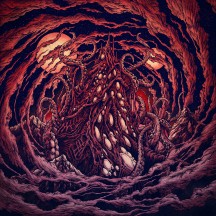 
Since the ending of the 777-trilogy, it seems that Blut Aus Nord has been on a road of reinvention. Disharmonium - Undreamable Abysses brings something new. Something sinister.

Like many of you, I became a fan of Blut Aus Nord by discovering the modern classic, The Work Which Transforms God, roughly at the same time as 777-trilogy was released. I was swimming in a corrosive pool of mechanical sounds at the time. As I expanded my horizons, I also became acquainted with the project’s more melodic, albeit less original, first couple of albums. The sound palette provided by Vindsval & co seemed to move back and forth between these two moods: Mechanical and dissonant, or melodic and epic. When Hallucinogen came out in 2019, it seemed that Blut Aus Nord was slowly developing a new sound. It was a melodic affair with vibrant guitar work that bore some slight resemblances to moments you’d find on the Memoria Vetusta series. But there was something else in it too: A spark of psychedelia, an illusive feeling of the music not belonging to this world. The skies opened up and displayed the beautiful colors of the vast cosmos. I held that album in high regard for how comfortable it made me feel while I explored the stars.

Not much luck here, my friends. This is not pretty. This is downright terrifying.

For starters, the production is much more intimidating. There is more bass and reverb on this album, which results in a muddy and cavernous sound. At the same time, it feels very expansive and echoing. You can clearly hear all the elements that build the complex whole. Thus, Disharmonium manages to make you feel like you are traveling the cosmos, but with an added feeling of claustrophobia lurking around as you feel the weight of celestial bodies crushing your soul into smithereens. The two elements responsible for this cosmic dread are the guitars and vocals. Somehow Disharmonium feels like an instrumental album to me, and yet I can’t emphasize enough how big of a role the vocals have on this album. The distant howls, whispers and choirs feel like a never-ending vortex that sucks the life and light out of everything. They are completely detached from this reality but trust me, they are out there to get you. Then there are the guitars. Once again Vindsval shows why he is several levels above most musicians. All the melodies twist and turn every few seconds, making you question the passage of time and which parts have been repeated or not. I’d like to mention the drumming as well, as the album features some of the most organic drumwork Blut Aus Nord have presented in many years, with “That Cannot Be Dreamed” being a standout with how jazzy and intricate the drums are.

This is Blut Aus Nord’s finest work in at least a decade. There is an element of repetition involved that reminds me a lot of one of their most divisive albums, MoRT. The sense of cohesiveness and layering of sounds on both albums is very much alike. But while MoRT was more subtle in grabbing the listener and throwing them into a dark corner of human decay, Disharmonium’s take on psychedelic horror is very intense and upfront from the get go. Blut Aus Nord has once again re-invented themselves. Grab this album and your numbing substance of choice, go to the nearest cave you can find and get lost forever.