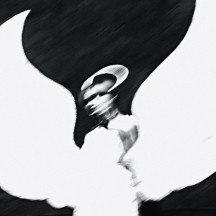 
Sometimes, you just have to leave your established metalcore/djent sound to become a Deftones clone.

Well, things are never that simple. But in very very simple terms: I like Deftones more than I like djenty metalcore, so Thornhill's skin shedding moment did end up making them more enjoyable for me in the end. My relationship with djent was always more of a distant tolerance and occasional appreciation. Some may even remember that one time I reviewed a TesseracT album, and there have been djent albums this year by some old favs that I considered reviewing, but didn't do much for me. I was expecting the same kind of thing when I went into Thornhill's new album, considering how lukewarm I felt to 2019's The Dark Pool.

On one hand, this is a case of wearing the influence so firmly on the sleeve that it almost gets into Greta Van Fleet levels of imitation, and though the difference in vocal tones and instrumentation are distinct enough that one wouldn't really be fooled into thinking that this is actually some late era Deftones, the resemblance is uncanny. From vocal inflexions, lush shoegaze influence, noir feel, slight nu metal tinges in some riffs, the trip-hop cut (see "Valentine"), everything is just so clearly the imprint of another band. A band that I love and I'm a sucker for and I'm still bitter that out of all the dates on their tour that they had to cancel for logistical reasons, they just had to cancel the festival I was going to mostly for them. Am I gonna review this more positively just because of that? I am not at liberty to disclose that information.

Hint: as far as Deftones clones go, Heroine is pretty fantastic. I'm reminded of that Wheel album I reviewed, where a band with amazing songwriters was able to create an album in the sound of another band that almost holds a candle to the original material. And since Wheel's next album found them closer to their own sound, I can only hope this would happen with Thornhill's next album. There are already signs of what would make their sound unique here, as the moments that made me jump out the most out of my "this is a Deftones clone" mindset were the use of keys and some of the djenty undertones remain (see "Casanova"), and I would certainly like something closer to a Djentones mix rather mere imitation. And since singer Jacob Charlton often sounds closer to Muse's Matt Bellamy than Chino Moreno, I wouldn't mind some influences coming from that side as well.

Thornhill do get the most out of me being a sucker for this sound (not the first time I reviewed Deftones or Deftonescore), and they sprinkle Heroine with just enough originality to make me hopeful that they're gonna evolve this sound into something more unique for them, because being a Deftones clone full time might not be the most feasible career path.

Written on 16.06.2022 by
RaduP
Doesn't matter that much to me if you agree with me, as long as you checked the album out.
More reviews by RaduP ››