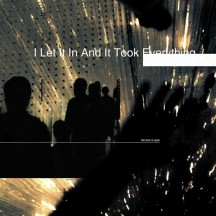 
Metalcore took a lot of directions lately, some went to a more alternative rock sound, some more progressive djent, some in a more atmospheric direction. Loathe add nu metal, mathcore and... shoegaze?

I was a bit surprised by Loathe as well, especially comparing their only two albums. 2017's The Cold Sun was a pretty good djenty post-hardcore album, but it didn't make Loathe stand out that much from their peers. Three years later, I found I Let It in and It Took Everything suddenly being the number 1 best rated album for 2020 on Rate Your Music for a while, which is no small feat especially for a metal album. So what exactly does make I Let It in and It Took Everything stand out so much? Maybe because they sound like what if Deftones dream metal sound was intertwined with the usual djenty post-hardcore but also put through even more dreamy walls of sound.

The two sounds are kept fairly separate here, though it's not like they are completely independent of one another. The wall of sound does influence the production and denseness of sound of the hardcore side and the hardcore side does make the shoegaze side feel a bit more punchy, but even so there is a great contrast between those. The album doesn't interchange between the two too often, so you'll find yourself enjoying Deftones-ish dream metal for a fairly long time before hearing chugs again. The transitions between the two are thankfully quite natural so it never feels like it forcefully puts the two one against the other. Well one can only hope that further releases will cement the blend with more cross-integration of the two sounds (and maybe some extra ones).

It's obviously the shoegaze side that had me most hooked, me being a pretty big Deftones fan and all, and it really delivered as much as I thought they sounded a bit too similar to their influence. The music is lushly layered and you can tell that a lot of though was put into making the atmospheres as intricate as possible instead of just blending the sounds as a gimmick. Sometimes more electronic, sometimes more distorted, there is always a feeling that the album envelops you in its sound, which also helps the album's emotional resonance. Kadeem can clearly hold his own as a hardcore vocalist, but the cleans were what won me over as the final piece of the soothing puzzle that is the sound of the album.

I Let It in and It Took Everything will sweep you off your feet and will show you everything that metalcore can achieve once it's been coated in walls of sound, sweeping synths and some chugs.

Written on 22.02.2020 by
RaduP
Doesn't matter that much to me if you agree with me, as long as you checked the album out.
More reviews by RaduP ››