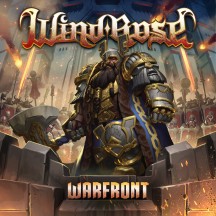 
This review is sponsored by Warfront, a new ambitious MMORPG out now on all devices and streaming platforms. Choose between different warrior classes like dwarves and dwarves, ensemble a team of five players, and join *checks current number of ratings* 29 other Fellows of the Hammer in this marvelous adventure. Use promo code "METALSTORM" to get 10% off the Army Of Stone loot box set.

Now for real, tell me that cover art doesn't look like those MMORPGs that get a bunch of ads and sponsorships everywhere and you wonder who in the world actually plays them? I can't say I blame Wind Rose for it, since generally the character design is the best thing about those games anyway, and what they should ideally be like is some epic adventure that would be fitting for Wind Rose's brand of power metal. I first got to know the band because of their cover of internet classic "Diggy Diggy Hole", but Wintersaga did prove that the band had more than just that gimmick for them. Now, I re-meet Wind Rose because their cover art looks ripped from an MMORPG. There's something about these guys' marketing.

If you're not familiar with Wind Rose, they're an Italian band whose sound has been a blend of folk metal, power metal, symphonic metal, and progressive metal, with later released putting more emphasis on the folk side than the prog side of earlier releases. That's pretty much the gist of it. Wintersaga was already a bit hard to determine whether it was more of a folky power or a powery folk kind, but Warfront makes it even more difficult by also upping the symphonic aspect of the music more than previously, making them sound even closer to their kinsmen in Rhapsody Of Fire, with prog just an undertone is some of the longer songs. And pretty much using this refined blend of sound for another serving of dwarven metal, a gimmick that does make me wonder whether there's a height and beard requirement for joining Wind Rose.

Making music about things like Moria and Mahakam should be a shtick that eventually runs out of material, and the fact that I can count three songs that follow the "X Of Y" template (four if you also include the multi-worded "The Battle Of The Five Armies") is a bit concerning. And the sing-along fantasy-themed folk power metal band is a sound that feels very mid 2000s metal, and then later to big label metal, so maybe what really works about Wind Rose is not just their sound and gimmick. Maybe it's my disinterest in this sound lately that kept me from digging more into recent stuff, but Wind Rose really get what makes this sound work and why it held such a high market share of metal a decade or so ago. Big choruses, cinematic sound, just the right touch of whimsical, all of this just makes it rousing. And rousing in a way that this sound hasn't made me in quite a while. Once again, take that with a grain of salt because I'm generally not going out of my way to get more of it, and maybe I wouldn't even have noticed this band if not for "Diggy Diggy Hole". But I'm glad I did.

Written on 18.06.2022 by
RaduP
Doesn't matter that much to me if you agree with me, as long as you checked the album out.
More reviews by RaduP ››