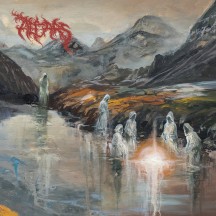 
A second lease of life for this Australian disso-death metal band courtesy of an injection of Convulsing.

If the band name “Altars” isn’t familiar it you, it’s not only because they’re far from the only metal band with that name, but also because they had a pretty short stint, coming out with a demo, a couple of splits, and their 2013 debut full length album, Paramnesia, before calling it quits in 2016. If that was the end of the story, it would be an album with a pretty good reputation in the underground, albeit still not something you’d call a “cult classic”. In 2021, the band was revived with a significant change: bassist/vocalist Cale Schmidt was replaced by bassist/vocalist Brendan Sloan of Convulsing fame.

That move has obviously added Convulsing as a strong namedropping reference for the sound of this album, adding a blackened death undertone to the Morbid Angel meets Gorguts meets Immolation meets Portal sound of the band, without necessarily turning it into blackened death. Existing within this scene obviously calls for namedropping galore, but Altars’ trick is not being overly dissonant or overly technical, though they are more dissonant than they are technical. By a pretty significant margin.

It’s not that Ascetic Meditation is a simple or repetitive album, since there’s plenty going on, but when a lot of people see technicality as a deterrent to memorable songwriting, having less of an emphasis on it while still not feeling as memorable is pretty weird. It’s not like it is lacking in dynamics, especially due to the doom injections that accompany the slower sections, that combine together with the atmospheric emphasis to create a sound that creates a sense of unease. And within a scene that thrives on dissonance, that sense of unease makes it feel more purposeful along with the more straight-forward songwriting.

Even though it is not necessarily as memorable as I would like it to be, there’s still enough that feels unique about Ascetic Meditation to make it a worthwhile return for the band.

Written on 14.07.2022 by
RaduP
Doesn't matter that much to me if you agree with me, as long as you checked the album out.
More reviews by RaduP ››