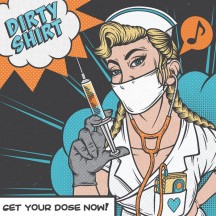 
I misread the instructions and got my dose almost four months late. I’ve arrived at this jumping nu metal folk party a little later than is considered fashionable, but fortunately Get Your Dose Now! is not quite as vital as the vaccine pictured on the cover.

Ever since a career restart in 2010 with Same Shirt Different Day, Dirty Shirt have been upending the accepted course of alternative metal with increasingly groovy and gregarious cocktails of industrial riff-smacking, rambunctious vocal change-ups, and Romanian folk music. Their last album, 2019’s Letchology, was one of the partiest albums ever to smack the metal scene upside the head, and more than that it was, in my opinion, Dirty Shirt’s most succinct and successful mission statement to date: short in duration, big on hooks, and permeated by irrepressible irreverence toward everything except alcohol and riffs. Frankly, it was something of a revelation for folk metal, and although their countrymen later perfected the shameless pop version of folk metal, Letchology remains a standout work in the last decade’s evolution.

You can expect Get Your Dose Now! to hit many similar beats (figuratively and musically), after a fashion. Track two, “Pretty Faces,” features guest vocals from Benji Webbe that cause me to wonder why I never made the Skindred comparison before – the song’s rampaging funk sounds like exactly what Skindred have always tried and usually failed to achieve. If you like the Kontrust-meets-Gogol Bordello sound that comes from smashing together big bruiser chords, free-wheeling choruses, and a bunch of guests from Transylvanian FolkCore Orchestra, then Dirty Shirt have some of their characteristic riotous energy frittered away in tracks like “Geamparalele” and “Dope-A-Min.” The offbeat emphasis, string-accompanied breakdowns, and hearty growl-plus-nasal clean combos result in a rare and intoxicating blend of rhythms and melodies; roughly half an hour long and rich in replayability, much of the praise I heaped on Letchology would apply to Get Your Dose Now!.

The first impression may catch you off guard, however. The cover says ‘90s pop-punk, but the opening track, “New Boy In Town,” is more like a dirge than the instant adrenaline punches that typically kick off the airing of Dirty laundry. That’s not a fluke, or so it seems, for the dirtiness of this album extends to its very soul; the presentation may be as flippant as ever, but the tone of Get Your Dose Now! is unexpectedly dour. If you see a track called “Hot For Summer” lettered in puke orange underneath comic book artwork and a logo that catapults the phrase “Dirty Shirt” into your face with reckless ambivalence, you’d expect a breezy and digestible pop tune that made you feel like summer. Instead, it sounds like a funeral hymn sung by Dalriada – its jaunty “la-la-la” verses can’t overwrite the wistful flute melody and baleful chorus. “What’s Going On” and “Cand S-o-mpartit Norocu (Part 1)” are striking moments of clarity that stop the party altogether to ask where in our lives we have gone wrong: beautiful pieces of musical craftsmanship, no less compelling in their listenability than anything else in the band’s catalogue, but drastic departures from the blithe, animated attitude Dirty Shirt is known for. These songs are serious, alarming, foreboding – the layers of vocals resemble church choirs more than partygoers and the groove settles into doom.

This is the most lugubrious Balkan shitpost metal album you’ve ever heard. Party, but be worried. Let yourself go, but be ready to reel yourself back in. It’s a somber celebration indeed, and one where the fun is at risk of being urgently asked to leave the room at any given time. It’s strange – I certainly wouldn’t let the album play through at a social event the way I would Letchology or Dirtylicious. But it’s also quite a short album, so the oddness of the disjuncture passes quickly along with everything else, until I hit “play” again.

Moodswings aside, Dirty Shirt clearly still have a firm grasp on the sound that really came into its own a couple of albums ago. Past comparisons to Destrage and Trollfest still hold up, and I find greater similarities to Dalriada than on their past works, particularly on “Geamparalele,” which is a great complement to the vocal complexity here. Don’t make the mistake I did: get in line right away and get your dose now!