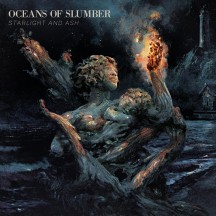 Texas’s Oceans Of Slumber caused murmurs with their debut record Aetherial, but it was only with the arrival of Cammie Beverly (né Gilbert) on vocals that the group really started to make a name for themselves. The doomy, extreme-tinged progressive metal base was emphatically elevated by Beverly’s soulful, powerful vocals, meaning that even a record as bloated as their 2020 self-titled album could leave an overall positive impression due to her contributions. As far as the other members of the band are concerned, outside of founding member and drummer (and now husband of Cammie) Dobber Beverly, most of them are newer faces, all of them having joined in 2018-19 in place of the original members. With such upheaval and such attention placed upon the band’s vocals, it’s perhaps not surprising that Oceans Of Slumber have changed course quite substantially on their latest effort, Starlight And Ash.

Although I can’t find the original quote, several reviews of this record mention that the band have described their updated sound as ‘the new Southern gothic’, and gothic country can be evidently heard as an influence on Starlight And Ash. What can’t be heard as an influence is extreme metal; the extreme elements, which remained a background presence up until the self-titled record, have completely departed, and one would be hard-pressed to even place this album under the progressive metal umbrella. In the heavier portions of this record, Starlight And Ash veers closest to hard rock or alt-metal sounds; the soulful vocals and dirge-like arrangements of “Heart Of Stone” offer a more morose take on the kind of Southern-tinged alt/heavy rock style that has graced the stages of many mainstream metal festivals in the past couple of decades. Nevertheless, there are brief moments of intensity, most strikingly in the rousing, pounding climax of “Red Forest Roads”,

Now, these changes mean that Cammie has the leading role on Starlight And Ash, and unsurprisingly she rises to the challenge, from the pop-leaning rock energy of “The Waters Rising” and the soulful spirituals of “The Lighthouse” (Zeal & Ardor fans will likely appreciate this track) through to the tender emotion of “The Hanging Tree”. I will admit a few moments on the album come across as slightly exaggerated (although I’m sure most of that is just repeat playthroughs amplifying the most minor of irritations), but the full-belt power in the louder moments of “Red Forest Roads” is exhilarating, particularly in contrast to the muted origins of this song.

As for how I feel about this change in direction in general, I’m more ambivalent. On first listens, I appreciated the shift from the self-titled, which I felt drowned its best moments in an ocean of excess. These songs are more straightforward and stripped-down, which allow the strongest moments to come through clearly. On the flip side, on the whole I’m not massively fond of the style they’ve gone for here. When it clicks best, such as with the emotionally charged double-header of “Red Forest Roads” and “The Hanging Tree”, Starlight And Ash manages to cut to the core rather successfully; however, there’s a bit too much of this album that I find either bland (“Just A Day”) or merely a bit unremarkable (“Hearts Of Stone”, “Salvation” - excluding its fairly grandiose ending). On top of that, it’s an album that’s tempered my positive early sentiments with repeat listens, rather than counter my more negative initial impressions.

Still, I do think for the most part that it’s a rather decent album, and a broadly successful change in tack. The one track that I really can’t deal with is the “House Of The Rising Sun” cover; Oceans Of Slumber found success with a rather thrilling cover of “Nights In White Satin” by The Moody Blues on Winter, but here, they take an already extensively covered song and do very little different with it; the main selling point are Beverly’s vocals, but here more than on any other track on this album, I find the overemphasizing to really start to grate, turning this song into a real damp squib that the comparatively solid “The Shipbuilders Son” is left to try and overcome to ensure the album finishes positively.

Ultimately, Oceans Of Slumber have opted for a new vision that plays to their strengths; however, it’s one that takes them away from what drew me towards Winter and The Banished Heart, and while I feel they’ve learned some lessons from their last outing, I’m struggling to muster up consistent enthusiasm for what they’ve created this time around.

Written on 27.07.2022 by
musclassia
Hey chief let's talk why not
More reviews by musclassia ››