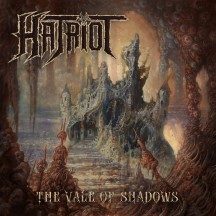 
"I got another confession to make, I'm no fool, everyone's got their chains to break, holding you."

Yes, metalstormers, I have my own confession to make. I had forgotten that Hatriot had released an album in the period between 2014's Dawn of The New Centurion and this year's The Vale Of Shadows (2019's From Days Unto Darkness, for those interested). So colour me surprised when instead of Zetro blasting out of my speakers as "Horns And Halos" kicks into life, it's his son Cody Souza behind the microphone.

How could have I forgotten such an album? Well, if listening to Vale Of Shadows is anything to go by, it's because the music is forgettable. Aside from being caught off guard by the aforementioned change in vocalist, the rest of the album offers little in terms of surprises, perhaps being one of the more generic sounding thrash albums i've encountered in a while.

While this is not to say that the band are bad, it's that they are competent but unspectacular. Cody Souza's vocals (that sound like Zetro and Trevor Strnad were combined in a blender) are powerful. but provide no moments that make you stand up and sing along or sit back in awe ("Forceful Balance" sums this up). His brother Nick keeps up the power on the drums, but offers no thrills or spills, and sticks to being a powerful metronome. The guitar tandem of Paterson and Varvatakis do offer glimpses of quality across the album (the solos on "The Twenty Fifth Hour" are solid), but these are frequently isolated incidents in a sea of blandness.

There are tracks where the band as an ensemble do show sparks of quality; "Verminous and Vile" does have a good solo section and the propulsive drums make for one of the more memorable tracks on the album, while "Hymn For The Wicked" strips back the excesses and makes for a tighter track as a result. If the album had more inspired moments like these, then The Vale Of Shadows could easily be pushed up a few notches.

While there are no bad tracks per se, there is a marked lack of consistent quality to demand your continued attention beyond cursory replays. "Mark Of The Tyrant" is enjoyable enough as it plays out, but not something I would actively to seek out again in a hurry; I don't dislike it, I merely feel indifferent towards it.

After going back to refresh my memory with From Days Unto Darkness, the middling quality of The Vale Of Shadows is perhaps more of an aberration than a running theme, a misstep that the band will hopefully correct on any further output. While it won't leave a bitter taste in your mouth, The Vale Of Shadows isn't likely to be spun more than a few times, with metal fans being spoilt by a summer packed with great releases.

Written on 31.07.2022 by
omne metallum
Just because I don't care doesn't mean I'm not listening.
More reviews by omne metallum ››