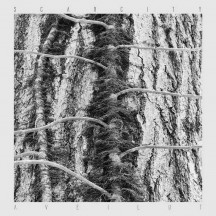 
‘Aveilut’, in Judaism, is the period of mourning after a loved one’s death. On their debut record, Scarcity depict this mourning not in the form of solemn melancholy, but as an experience of maddening anguish.

Scarcity is a two-man project; one of those members will be familiar to some here, as vocalist Doug Moore adds what is now a fifth project to his presumably ever-increasing workload, alongside his existing roles in Seputus, Weeping Sores, Glorious Depravity and, most notably, Pyrrhon. His collaborator, Brendon Randall-Myers, may be less familiar to most; a former athlete (who knows Moore through running), the Brooklyn-based composer has exhibited a taste for the unorthodox with experimental guitar-based and classical projects such as Invisible Anatomy and Marateck (who have had albums produced by the similarly forever-busy Colin Marston). On the back of multiple personal losses in a short window of time, Randall-Myers wished to explore these feelings of grief in a more primal and intense manner, and thus Aveilut came into being.

Given its primary composer is someone with an experimental music background, it shouldn’t be surprising to discover that Scarcity don’t write metal in an entirely orthodox manner. If I was to highlight a genre of metal that Aveilut exhibits the closest musical connection to, I would probably mention black metal; however, the noise, drone and dissonant currents that run through the record distort it from any easily recognizable form of black metal that one might have previously encountered. In some ways, the twisted nature of the record offers strands for fans of acts such as Oranssi Pazuzu or Aluk Todolo to latch onto; however, there’s a lack of even the unorthodox groove that these bands use. Instead, the guitars primarily form textures rather than clear riffs or patterns, the end result becoming incessant in its anxious nature.

The five tracks, which are simply enough named as “I” through to “V”, ebb and flow in intensity. “I” is in many ways a scene-setter, a gradual growth of increasingly distorted and discordant guitar tracks atop a frenetic, pounding tom-driven percussive performance. Some of the layers that are bled into these tracks would, by themselves, feel relatively light and potentially uplifting (for example, the bright repeating guitar motif that repeats through the middle few minutes of “II”); however, the ways in which they clash with the other guitar layers, the drums and the vocals turn this lightness into something more abrasive. On the topic of the vocals, Randall-Myers brought Moore into the equation to render the rawness of the emotions underlying the composition of this record, and the ghostly blackened shrieks that Moore uses throughout ensure that Aveilut translates those feelings of anguish.

In general, these tracks are all fairly structurally free-form, coming across mostly as cacophonies unrestrained by boundaries. This applies more to some tracks than others, however; there is a sense of direction and intent as “I” strides forward, but “IV” pushes those noise/drone/ambient aspects of Scarcity to the fore, eschewing percussion for large sections to instead allow the ensemble of discordant and seemingly directionless guitar layers to clash in a whirlwind of anxious sound. This degree of abstract composition will have the potential to alienate even some of the more ambitious listeners who come across it, but as someone that’s found bands such as Sumac to be intolerable in the past, there’s something about the way that Scarcity approach things here that feels logical and effective in inducing the kind of emotional response that they were presumably intending.

Aveilut is, by no stretch of the imagination, an easy album to engage with, and many will find its structural looseness and ‘black ambient’ style to be somewhat impenetrable. However, while I don’t wholeheartedly love it, there’s something about the pacing of the album that makes its approach just about click for me, particularly as the increased use of brighter tones on the closing song almost hints at a sense of finality and transcendence that is fitting for the conclusion of this type of concept. Randall-Myers approaches metal music from an outsider’s perspective, and the result is a rather unique take on a topic that has been well-explored within the genre.

Written on 31.07.2022 by
musclassia
Hey chief let's talk why not
More reviews by musclassia ››