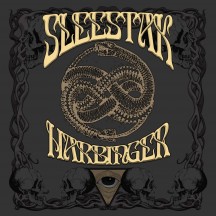 
Well, intrepid adventurers, it’s time to use your Sub-Etha Sens-O-Matic and hitch a lift on the Sleestak Pylon to join Marcus, Ben and Matty on a sonic expedition. This time we embark on a bit of a return flight to Altrusia.

When describing Sleestak over the years, I’ve used journeys around the solar system as a point of comparison, so let’s continue those analogies this go around. Hooray for consistency.

Our last ride with them, Aeon saw the band floating around the cosmos on solar winds and maybe occasionally dipping their clawed reptilian toes into the Metal Zone. Pretty heavy on the trippy and pretty light on the heavy.

Harbinger, as noted above the cut, harkens a bit of a return to The Fall Of Altrusia in that it’s a swell mix of both the trippy floaty cosmic cruising tunes as well as the return of the distortion pedal and some stoner-sludgerrific riffs.

The album opens flexing metal muscle, after an apocalyptic call to action on the lead-in track, “Obsidian Flow” and “If” both throwing sludge-fisted haymakers to let you know this will be a bumpier ride than Aeon.

However much like a bi-polar Sleestak (the giant lizard men from campy but heady early 70s Saturday Morning fare, “Land of the Lost” if you still aren’t up to speed, I’ve only been writing about these guys since Marcel first sent me Skylon Express back in early 2011) – pivoting between the Spock-like Enik and the raw aggression of his “descendants”, not only the tracks on the album slalom between Sludge and Trippy Trippy Spacetruckin’, the flow within the tracks themselves follows this trajectory.

During heavier tracks like “If”, the floor will drop at some point and the heavy riff beating gives way to the groove of the drums, the riptide undercurrent of the bass to pull you in while the guitar and effects make you feel you’re floating… before StonerSludgeDoom resumes.

On the more trippy tracks there is always that swell where things get intense. This continues back and forth throughout Harbinger, meaning there is enough of a change going on that if something starts to feel a little long in the tooth (?claw?) you’ll soon enough find yourself with a musical change of direction.

As with it’s antecedent, which contained a cover of Pink Floyd’s “Set The Controls For The Heart Of The Sun”, Harbinger also contains a cover of an iconic late 60’s track… this time The Doors “My Wild Love”, which goes, legs furiously pumping, into a temporary “Horse Latitudes” segue.

While I dig the return of the distortion pedal and covering Mr Mojo Rison, after taking this trek repeatedly (as prescribed by my physician), I’ll point to the sparse, acoustic-y “Song Of The Sea” as my favorite track. What is it with me and Nautic-themed stonerdoom?

While The Fall Of Altrusia (2011 MSA Staff Pick for best Sludge album) remains my favorite and their high (bong)water mark, Harbinger finds itself as my Vice Favorite of their releases.

So if you’ve read this far, you’re probably familiar with either their music or my fetish for former NBA basketball thug… er player Bill Laimbeer wearing a giant rubber lizardman costume and should already have fucked off my words to explore the Northwoods on Bandcamp.