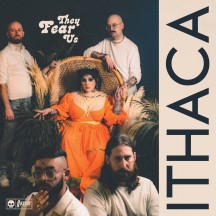 
A lot of political music is filled with a lot of justified despair, but contrast it with something a bit more cathartic and triumphant, maybe they really do fear us.

When I reviewed Ithaca's debut album, The Language Of Injury, I did compare their sound to Svalbard and Rolo Tomassi, and I feel like this comparison is even more justified this time around. The Language Of Injury was already a pretty varied hardcore record, with post-rock and mathcore and sludge and crust punk all having a share of the cake, but They Fear Us ups the cleaner side of the sound with a lot more shoegaze, alternative and indie influences, making some Deftones influences be more noticeable this time around too. The vocals themselves go into clean vocal territories much more often than they did on The Language Of Injury, and the increased forays into these clean territories lead to even more focus on the light/dark dynamics.

The effect of this shift in sound is reflected also as a change in mood, from the downtrodden to the triumphant. Ithaca are still angry and full of vengeance, but a lot of it gains more of a positive note on They Fear Us. This is the sound of a band that is clearly confident in both their sound and their message, something clearly reflected in the cover art as well. I do see the increased use of clean vocals as a bit of a point of contention, even though Djamila Azzouz is an amazing vocalist regardless of approach, as some of the transitions from and to cleaner territories still feel a bit shaky. I've been able to give those quite a pass, but the closing power ballad "Hold, Be Held", a moment clearly intended as the climatic triumph of the record, was the straw that broke the camel's back for me, the "jumping the shark moment". And I say that as Metal Storm's official poptimist.

And though the closing track sours every listen, I keep coming back to it for the ethereal shoegaze moments of "Fluorescent" and the hornet attack mathcore moments of "Cremation Party" among others. Ithaca's confidence is on full display, but I still think there's potential for a bit more maturation of this sound, as if they made this one step a bit too early. It's true that their confidence is infectious and it gives me no doubt in believing in them, especially with the skill on display here. I believed in them with The Language Of Injury and I believe in them with They Fear Us. Even with some gaps, this is still an immensely exciting record, one whose entire presentation reeks of instant classic. I wouldn't be so hasty as to call it one, but time will tell.

As it stands, it's another triumphant step for Ithaca, a showcase of skill, ambition, and confidence, albeit one that might lead to even greater things in the future.

Written on 06.08.2022 by
RaduP
Doesn't matter that much to me if you agree with me, as long as you checked the album out.
More reviews by RaduP ››