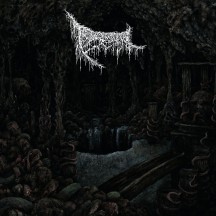 
A lot of chaotic music is described as "controlled chaos". On the contrary, it feels like Triumvir Foul created a beast so vile they cannot control it.

Triumvir Foul, the trio turned duo, comprised of two Ash Borer (among others) members, is the kind of murky death metal that avoids clean production and precise songwriting. They sound pretty similar to something like Grave Miasma, Teitanblood, Black Curse, but for the purposes of this review, the one I'm reminded of most is Antediluvian and their The Divine Punishment album. That's an album I really loathed. And not in the good way. It felt like someone messed up when mixing the album and accidentally put the drums half a second before everything else, and generally it had the vibe of uncontrolled chaos in the most frustrating ways. Well, there's less frustrating ways to nail that sound.

The thing is that I also find Onslaught To Seraphim to be frustrating as well, mostly for the same reason that I found Antediluvian frustrating. So fans of one will probably enjoy the other. But even though the music can feel a bit too loose both in terms of songwriting and production, I can get behind what Triumvir Foul are doing. True to the band name, this is some pretty foul music, one that is more on the dark and foreboding side than the merely crushing, even if crushing it indeed can be. There's a stronger doom influence to the blackened death this time around, marking the occasional atmospheric emphasis, sometimes even employing synths, though none of it really alleviates to a breather as much as a continuation of the punishing ominous vibe of the record. And the way that the bass is so clearly louder relative to the guitars makes the listening experience feel punishing.

The performances are really where the record excels at, even if there are plenty of moments where it jarringly feels like they're more foes than bandmates. The cymbal-heavy and blast-heavy drumming, the loud thundering bass, the wretched vocals, some occasional guitar solos (including guest spots from Mortiferum's Max Bowman) that feel ripped out of a heavy metal song, reveal a band that finds groove in the most abysmal of places. It's unwelcoming in sound and in how that sound evolves. Even if the entire band slows for the slower moments and thrashes for the faster moments, it really feels like they're pulling each other to do so than doing it because of usual songwriting reasons. I still can't put my finger on exactly what makes it sound the way it does, but it makes some of it sound frustrating, while at others that feeling diminishes into something that really gets the appeal of something so berserk.

This is death metal so misshapen it turns autoimmune. What should implode on itself instead becomes punishing in ways that are more right than not.

Written on 08.08.2022 by
RaduP
Doesn't matter that much to me if you agree with me, as long as you checked the album out.
More reviews by RaduP ››