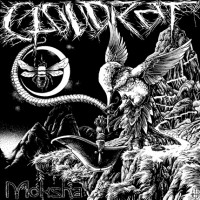 
Grindcore has come along way since it emerged in the late 80s, with bands like Napalm Death, Carcass, Terrorizer and even Bolt Thrower contributing to this new wave of extreme punk. Now in the modern day, bands such as Cloud Rat have taken grindcore to experimental new heights, while maintaining the aggressive spirit of grindcore's traditional roots, and this album clearly shows that. This has all the right elements in place for a modern grindcore classic.

What's most striking about the album Moksha is just how far from sounding like your typical grindcore album it is; yes for the most part it's short, ferocious and structured as you would expect from a grindcore album, as well as their previous albums, but this does go far beyond that. At times, they even sound like a 90s alternative metal band, especially in the unusual lighter sections. On top of this, you have the distorted guitar sound and riff style that have a slight hint of a blackened sound to it, not too far from how the guitar sound was during the 90s black metal era. The band that springs to my mind the most when I hear the guitarwork is Darkthrone, so maybe I shouldn't be that much surprised by the sound they adopted, since Darkthrone had eventually developed their style into crust punk.

What also makes this album so uniquely different is the lyrics, which are much darker and much more meaningful than what you tend to get in the vast majority of grindcore albums. You could almost say at times the lyrics are spiritual. But it's not just about the lyrics, her overall vocal performance is also incredible; they are undoubtedly harsh, yet with an 80s punk rebellion vibe to them. She brings so much energy and passion with her vocal style. The structure of the album has a great rhythm, with many catchy hooks, and all the instruments come together nicely. The production is nothing out of the ordinary, but there is a slight rawness to it. It's clear that the production is intended to get that early grindcore sound, instead of a cleaner, more crisp-sounding production; I think this type of production worked well for them, especially as it emphasises the distorted guitar tone.

The beginning of the album flows pretty much as you would expect, with short, aggressive, and fast-paced tracks that contain plenty of rhythm and groove. That is until you hit the song "Infinity Chasm", which for me is a pleasantly smooth and mellow surprise; it seems to be strategically placed midway amongst the musical chaos to chill things down a little with its eerie build-up before then ending with one of her insane trademark screams. The album then goes back to its usual explosive fast-paced short songs that relentlessly flow right up until the last few tracks, when again it suddenly slows down. The last track is most unusual, as it's much longer and completely different in sound to the rest of the album; it's basically a slow-building ambient track, one which only leads to an empty abyss of nothingness.

Although the closer for me did get quite tedious towards the end, it was certainly a bold and unexpected move, so I certainly have admiration for the band for trying this. It's also interesting to note that they covered one of my all-time favourite Neil Young songs, "The Needle And The Damage Done", and their take on the song really does send chills down my spine: another unusual but pleasant surprise in what I can only describe as a mighty fine album, one that I believe will appeal to any grindcore enthusiast.