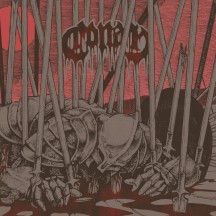 
The band named after the barbarian return with another appropriately barbaric record, with guitar tones to rattle the bones of the hardiest warrior.

As Apothecary mentioned the last time we reviewed a Conan record, back with 2016’s Revengeance, Conan are a band with a name that perfectly encapsulates the attitude they bring musically. They play stoner doom at its most primitive, with absolutely filthy tones lurking at the lowest possible end of the audio spectrum, punishing doomy trudges and rowdy more up-tempo stoner cuts. It’s a formula that has clicked less successfully with me on record that I would expect given my own tastes, but an epic performance from Conan at last year’s Bloodstock festival renewed my interest in the hyperpower trio, enough to make Evidence Of Immortality the first time I’ve actively anticipated a record from the group.

Now, Evidence Of Immortality (which, coming 4 years after Existential Void Guardian, represents the end of the band’s longest album cycle) delivers pretty much what you would expect from a Conan record. With songs ranging from 3 to 14 minutes, there’s variety in approach across the album, but that variety is delivered for the most part with a singular mentality. “A Cleaved Head No Longer Plots” opens the record with 10 minutes of vulgar stoner doom goodness that fluctuates between ‘slow and heavy’ and ‘really slow and really heavy’, a brief guitar solo providing the only real respite from that thunderous guitar tone; “Levitation Hoax”, at half the length of its predecessor, ups the tempo markedly, but maintains the same attitude and weight musically. Despite the reduced length, however, there is a bit more within-song variation on “Levitation Hoax” compared with the opener, as it ranges from bursts of blast beats to a (relatively) muted late-song bridge.

Most of the album, as already intimated, follows the example of the early songs, the main variety coming in the tempo of the tracks (which, perhaps unsurprisingly, peaks on the album’s shortest song, “Ritual Of Anonymity”). The question raised, then, is how all this noise translates into satisfying outcomes. As I mentioned earlier, I’ve not been a big fan of Conan on record in the past, and while time has warmed me to them, I’m not completely converted by Evidence Of Immortality. The one thing that really sticks out to me is how bigger an impact all that heaviness makes when Conan slow things down. “Righteous Alliance” is an absolute bruiser of a track, accessing some seriously vile sounds when trudging towards its climax. On the more up-tempo cuts, Conan are fun enough, but I’ve not quite clicked with the riffs underlying all that noise as much as I’d like.

The one ace up the album’s sleeve, however, is its final song. The longest track here, “Grief Sequence” approaches slowness from a different angle. The loud whirling synths laid on top of the almost funeral doom-esque metal base takes Conan closer stylistically to a band such as Monolithe, and the sense of dramatic grandeur that results from the change in tack means that Evidence Of Immortality ends on a really emphatic note. The song does still remain quite single-minded for the most part, so I can’t guarantee that further renditions of this style would remain as compelling if future records bring it back enough to lose some of that sense of novelty, but at least in this instance, I feel it makes for a really solid conclusion to what is otherwise a satisfying but unspectacular release.

Written on 17.08.2022 by
musclassia
Hey chief let's talk why not
More reviews by musclassia ››