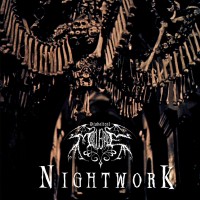 
Nightwork, Diabolical Masquerade's third release, and many wouldn't hesitate to call it their best work. This is an album that, although relatively short, still has such a huge impact, and remains one of the most unique and spectacular black metal releases of all time. All of this is the result of two musical geniuses, of course.

Just in case you didn't know, Diabolical Masquerade started as a one-man avent-garde black metal project, created by Anders Nyström (aka Blakkheim) of doom metal band Katatonia. This album also features Dan Erland Swanö, who has worked his magic with several other high-profile bands, but was most recognised at the time for his work with progressive death metal band Edge Of Sanity. Therefore, you wouldn't have been wrong to expect anything short of spectacular from this duo, since they were well established musicians who had already made a name for themselves by the time they released Nightwork. The first two releases had proven successful, both the impressive debut Ravendusk In My Heart as well as the equally impressive second release, The Phantom Lodge, but it wasn't until this third release, Nightwork, that the musically talented duo really showed what they were truly made of; together they created a masterpiece here, one full of epic melodies, great songwriting, and magnificent song structures.

The album is constructed in a bizarre fashion, with irregular tempo changes, riffs that are highly melodic, keyboard and synths that occasionally range from creating a sinister vibe, to having a circus vibe to them, and harsh vocals and shrieks that often vary in range. So, this is obviously far from any traditional black metal album one would have heard at the time of its release. Repetitive tremolo riffing and hammering blast beat drumming are almost non-existent here, hence why many label this particular style as avant-garde black metal.

Now, you may have noticed the strange charismatic use of 'z' in the song titles rather than 's', such as "The Eerie Obzidian Circuz", and "Thiz Ghoultimate Omen". Now, I understand that these odd titles look like something you're probably more likely to get in a black metal parody about gangsta rap, but that's obviously not the case here. I believe instead this was due to Blakkheim wanting to add a humourous touch to the album, which in a way he did, by creating a lyrical themed setting based around a theatrical horror movie. I suppose you could say the themes had a touch of influence from King Diamond.

This album has a strange, sinsister, disturbing, and yet captivating atmosphere, almost as if the listener is wandering through a haunted mansion. For me, it sounds like something that would have made a suitable soundtrack for a Stephen King movie. The atmospherics are mostly made up from the keyboards and synths, which are within the great domain of Dan Swanö. He uses many sound effects from pianos to choirs, all of which add a mysterious, dark atmosphere to it, making this such an important layer to the album's overall structure.

One of the areas where this album differs from the previous two releases is Swanö taking the drumming role, as well as keyboards and backing vocals, which unlike the first two releases featured a drumming machine, and the difference is clear. His performance is unsurprisingly outstanding, and the drums have a tremendously powerful and much fuller sound too. Blakkheim's guitarwork here is also worth taking note of, as I would say this is one of the best ever performances in his whole career. He shows a masterful array of technical skills, and provides some outstanding melodious riffs throughout the album, particularly the main riff on the opening track "Rider On The Bonez". His style of play is certainly a long way off what you would hear from his work with Katatonia, although some influences of his previous work do creep in from time to time, particularly on the last track "Haunted By Horror" with his slower, more melancholic playing style.

This album may be more suited for the obscure and adventurous listener, but that's not to say fans of raw and traditional black metal won't appreciate this, because at the end of the day, this album has a bit of everything for all metal heads to enjoy; even those who don't usually appreciate black metal will probably be pleasantly surprised by this. That is why it will always remain a classic in my opinion.