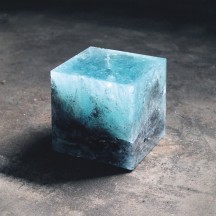 
01. Mortichnia
02. The Glare Is Everywhere And Nowhere Our Shadow
03. Incomplete Map Of Voids
04. Cenotaph To The Final Glacier


Locrian dials back the metal, amps up the ambience, and sound as terrifically terrifying as ever, creating dystopian dirges with dysphoric drones. I would say, “Welcome to Postapocalyptica,” had we not all already been here for a while, languishing under the scorching sun. It has been 7 years since Infinite Dissolution. If there is one thing we know for certain, it is that everything inevitably changes, and so has Locrian. Where their previous album (as well as its predecessor, Return To Annihilation) was a refreshing blend of post-rock, black metal, and drone, New Catastrophism contains only the barest hints of metal adorning its Spartan, sprawling soundscapes.

I was not sure what to make of it at first, because unlike the impending ecological doom of the Earth this album revolves around, Locrian’s change in sound came across as quite unexpected. Then, I remembered that this is the band behind 2011’s The Clearing, the title track of which was a nearly 18-minute long piece of static, noisy synth ambiance. New Catastrophism, however, is even more bare-boned, and uses the spaces between the sounds as an instrument in itself. Indeed, encompassing the first 10 of the album’s 35 minutes, “Mortichnia” had me bored at first. There is nothing here designed to catch your attention but the enveloping soundscape itself, and at first, I kept thinking, “Literally nothing happens for all this time, come on already!” Fortunately, as always when reviewing, I gave New Catastrophism the mandatory 3 listens, and they quickly grew to a couple more than that. “Mortichnia” does not contain changes, it is changes. Terence Hannum’s weeping, sweeping synth pads sluggishly crescendo behind André Foisy’s ubiquitous, pulsating guitar drone, as the track imperceptibly develops into the fossilised death march remains its title implies. Then, the next track continues with the same pulsating drone for 3 minutes, only swapping guitars for synths, before the heavy thud and trailing, dying heartbeat of Steven Hess’ drum (in singular) enters along with Terence’s subdued, suffocating shrieks.

If the first half of the album depicts the Earth in its death throes, the latter paints a scenery of post-societal collapse, with clean guitars plucking mid-tempo, slightly Americana-folky patterns for the third track’s 10 minutes, switching them up halfway through when joined by a laid-back kick drum and someone (still Terence) starting to scream in vain in the background. New Catastrophism ends on a note that is probably the closest to the sound most of us know Locrian for, with the acoustic guitar strumming a haunting, hooky, desolate melody over post-war war drums and a warbling distortion. It might take some patience to get there, but “Cenotaph To The Final Glacier” is the kind of gorgeous elegy worth waiting for, and it makes me want to listen to the entire album all over again just to get to the end of the surprisingly memorable ride that is New Catastrophism.

With the release of this LP, Locrian also released an EP called Ghost Frontiers, which contains 30 minutes of purely ambient synth soundscapes. I originally intended to review it separately, and I’m not sure what the intention is behind this EP; is it to be listened to separately, or as a companion piece to New Catastrophism? In both cases, much like my attempts to review it properly, it falls a bit flat. Maybe I just need the context that is the final two tracks on the LP to understand the first two tracks, but the LP sounds like a cohesive journey somehow, while the EP sounds (literally and figuratively) more lost in space. Have a listen to it if you enjoy half an hour of spooky, laid-back ambience. I’d rate Ghost Frontiers a 6.0, and it obviously does not affect my rating of New Catastrophism.

In the thermodynamic sense, Earth is for all intents and purposes a closed system. Entropy, in a closed system, never decreases. The sun keeps bombarding us with heat, very little escapes, and soon, The Final Glacier might need that Cenotaph. I have been seeing temperatures reaching 37 degrees even here in the allegedly cold North lately, and these four tracks do capture suffering in searing summer heat; it never relents, it seems it will never end, and it remains constant while changing you. Still, the sunlight feels sort of good on my skin, just like these tunes do in my ears. Locrian’s subtractive synthesis here might not be as immediate as their (not so, by now) recent albums, but it evokes the same sort of feeling the band always does: the end is very near, for we are living in it.