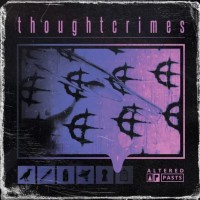 I'm not saying that just because there's a void to fill in the mathcore world, especially the kind that's a bit more alt-influenced, since the dissolution of the genre's biggest flagbearer. But also because Thoughtcrimes sports one of The Dillinger Escape Plan's members in its midst, in the form of drummer Billy Rymer. A lot of the headlines related to Thoughtcrimes have made sure to mention that connection, and I obliged, too, not only because I already reviewed another new project by an ex-member this year, but also because it's pretty weird that that's the only band connection I could find. And from the looks (hears?) of it, Thoughtcrimes are no amateurs.

If you know anything about mathcore, you know it's one thing: controlled chaos. Well, Thoughtcrimes take the more melodic and controlled alternative rock tendencies that were already very persistent in some of The Dillinger Escape Plan's material and run with them. A lot of the material has a sense of groove, not shying away from playing it a bit more straight-forward as far as riffing and melodies go. Throw in some Deftones, throw in some Killswitch Engage, more of the former than the latter, maybe even some alt rock and trip-hop that's even mellower for a change. Sure, that might make it seem like Altered Pasts is forgoing all its extremity, and to be fair, it forgoes a lot of it. And I'd be madder if they weren't so good at stretching their dynamism into both mellower and groovier territories.

And yet a mathcore record this still is. Subdued as the mathcore presence is, the band still explodes into extremity at appropriate points. Not really into as noisy or as pummeling of sections as mathcore can get, but explosive nonetheless. Sometimes, said extremity is still subdued into something that's more abstractly heavy without necessarily pursuing chaos. In a world where more and more Deftones clones are popping up, Thoughtcrimes can take a lot from that sound without trying to perfectly replicate it. Even though a lot of the attention comes from the drummer courtesy of the band connection, it's actually the vocals that capture most of my attention during the listen, with vocalist Rick Pepa's versatility working in both the melodic and the abrasive moments.

I think any disappointment that I may have with this record comes from expectation that this should have more of a mathcore presence if it is referred to as a mathcore record. I'm a hypocrite in that regard, since I literally referred to it as a mathcore record as well. As much as there's still a sizeable presence of that, most of my enjoyment came not from its mathcore qualities but in how those are integrated alongside the smoother alt rock qualities with some impressive musicianship to boot it off. There's a sense that Thoughtcrimes haven't completely baked their sound, but they're up for a good start with Altered Pasts.

Written on 01.09.2022 by
RaduP
Doesn't matter that much to me if you agree with me, as long as you checked the album out.
More reviews by RaduP ››