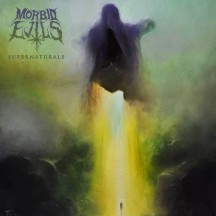 
Some metal musicians create side-projects that are barely distinguishable from their existing bands. Thankfully, some others are a bit more adventurous.

Finland’s Morbid Evils are a 3-man band whose most renowned member is multi-instrumentalist Keijo Niinimaa, who built his reputation as frontman and founding member of grindcore veterans Rotten Sound. Rotten Sound are grindcore in the classic ‘short songs, frantic pace’ mould; Morbid Evils goes very much in the opposite direction, instead opting for ‘long songs, trudging pace’. However, while taking a different form, the grimness and heaviness of one band is very much reflected in the other.

Supernaturals, the debut of guitarist Tuomas Varila and drummer Jarno Virkki on record in Morbid Evils, sports artwork (created by Dawid Figielek) that is eerily reminiscent of some of Mariusz Lewandowski’s artworks, and like several other albums sporting Lewandowski artwork, it features slow, dark and unflinchingly heavy doom metal. The doom in this instance is a fusion of death/doom with sludge metal, and the results of such a combination are as bleak and sounding as if emerging from a deep chasm as you would expect. With ample low end, very undefined production and beastly extreme vocals, there’s very little hope of any light piercing through the black void.

As far as the two components of this record’s stylistic hybrid are concerned, the death part of the death/doom perhaps gets most chance to take centre stage on opening track “Fearless”, with some mean buzzing riffs and more up-tempo drumming; still, these sections are countered by others in which slow, nasty, sickly grooving sludge dominates. This is above anything else a doom album, though, and “Anxious” makes this clear by plodding relentlessly through the darkness for large portions of its runtime; the suffocating thickness of the guitar and bass gives a huge weight to the slow, ominous doom riffs that definitely accentuates their appeal.

As much as the roughness of the production does offer some assistance for Morbid Evils in creating the kind of oppressive atmosphere they are presumably aiming for, it does resulting in Supernaturals sound a bit muffled, and I feel this becomes more obvious on “Tormented” as the band bring some slightly more melancholic tones into the equation. Beyond the production, I do feel that some of the tracks, while comprised of solid ideas, don’t quite come together into an entirely satisfying whole; again, “Tormented” comes to mind, as the strong sad-tinged sludge grooves in the first couple of minutes don’t receive much payoff later on.

Supernaturals shows that Niinimaa is in no way confined to breakneck aggression musically; the extreme doom on offer here has the sonic depth and sufficient satisfying passages to make a good positive impression overall. Still, when scratching below the surface, there’s some work to be done to find the most rewarding way of bringing those passages together.

Written on 04.09.2022 by
musclassia
Hey chief let's talk why not
More reviews by musclassia ››