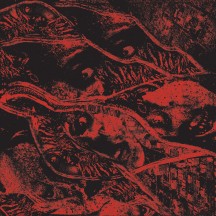 
If any of you would like to try the fine art of masochism for about 20 minutes, lie on the ground and let Vermin Womb drop a sledgehammer on your face.

There are some genres that are just more fit for the shorter runtimes. Most of them stem from hardcore punk. Vermin Womb's grindcore is pretty close to the most extreme end of the spectrum of hardcore punk, even though they're not the noisiest, faster, nor most oppressive grindcore band around. But Retaliation's 19 minutes of runtime makes them feel like an overwhelming experience throughout its entire duration, something that might seem a bit too much like an endurance test with more standard album lengths, but 20 minutes? A piece of cake! Drop the sledgehammer!

I was pretty bummed when Vermin Womb called it quits a couple of years ago, not only because 2014's Permanence and 2016's Decline were ballin' grind records, but also because mainmain Ethan Lee McCarty would no longer have a front for his grind leanings. First it was Clinging To The Trees Of A Forest Fire, and Death Of Self, and then Vermin Womb, all of which served as a pretty good contrast to the slower and sludgier Primitive Man. And as much as I like that, the slow / fast contrast is something that's pretty essential in crushing music. Unless you really reduce the runtime. Like Vermin Womb did here.

And that is Retaliation's strength and weakness in one. It's very focused on being pummeling, having its grind sound approach both deathgrind and blackened grind, and just generally fitting that sledgehammer analogy. But save for the noise interlude in "Ambulance", there's very little deviation from this formula. It's a formula that works for the entire duration, but it leaves me without that much to say about Retaliation other than for me to try and find even better analogies than a sledgehammer and masochism, but that was already perfected with Decline's review. What else? Sped up Primitive Man? Maybe, it is indeed a more time-efficient way of consuming your crushing music than Caustic was.

This was a pretty grand year for grind, so Vermin Womb's comeback is in good company, and it itself contributes to that. If those other ones didn't leave you charred enough, there's more to be had with Retaliation.

Written on 06.09.2022 by
RaduP
Doesn't matter that much to me if you agree with me, as long as you checked the album out.
More reviews by RaduP ››