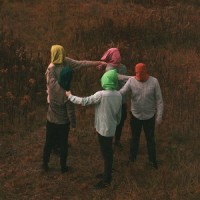 
Every self-respecting mathcore band should have their tongues at least occasionally firmly planted in their cheeks.

You don't even need to read lyrics of song titles to realize that there's something a bit whimsical about the band, just knowing that they named the band "The Callous Daoboys" is quite a good indication of what's at play here. Mathcore, with its chaotic approach to music, can sometimes benefit from such an approach, as The Callous Daoboys take it to even more chaotic extremes, for better or worse, sprinkling in some sasscore and the "throwing shit at a wall" school of avant-garde metal. Then you have everything from song titles like "Title Track" or "Beautiful Dude Missile", and the lyrics and videos all matching that chaotically whimsical and tongue-in-cheek tone of the record. Or is it the other way around? Regardless, the point is that Celebrity Therapist is mathcore that doesn't take itself too seriously.

No mathcore band is free from The Dillinger Escape Plan comparisons, and ironically they sometimes sound more like The Dillinger Escape Plan than a band with an actual The Dillinger Escape Plan member in it. That's mostly because Thoughtcrimes leaned a lot into alt metal melody, whereas The Callous Daoboys still sound unhinged even at their most melodic, reminding me more of Mr. Bungle or Naked City in how large the chaos can feel like, and how that gargantuan disorganization can feel humorous. With "controlled chaos" being the defining descriptor for mathcore, Celebrity Therapist work in more chaos than control.

This does make the music sound quite a bit disorganized. Sprinkling it anything from synthy ambient interludes, clean vocals, a violin, choirs, funky moments, something you could almost describe as vaudeville, honest-to-God alt rock, to expansive post-rock. Sometimes in the space of a single track. Needless to say, Celebrity Therapist is quite a lot, and the moments where they feel like they'd want to be more in control of the chaos do betray that they do actually take their music seriously. The Tool-ish bass from "Title Track" is ironically the most unexpected moment out of all the craziness, and with similar moments sprinkled throughout, it reveals a band more apt at choosing what to throw at the wall than they were on their debut a couple of years ago.

The blend of very serious moments with very unserious tongue-in-cheek chaos does make Celebrity Therapist a really interesting record. The coexistence of big choruses, breakneck riffing, and quirky randomness is something that still requires some work.

Written on 13.09.2022 by
RaduP
Doesn't matter that much to me if you agree with me, as long as you checked the album out.
More reviews by RaduP ››