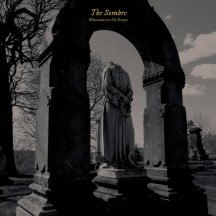 
01. From The Depths Of Misery
02. Alone In My Desolation
03. The Mourning Gloom
04. Monuments Of Grief
05. When Death Comes I Will Be Beside You
06. Paraside Regained


Sometimes the influences take over and there’s more sound than songs.

Just 3 years ago, Mories unleashed one of his most traditional-sounding projects, The Sombre. The debut greatly captivated me, as it was a heartfelt rendition of death/doom metal. The album perfectly captured the beautiful melancholy of the “Peaceville Three” (Anathema, My Dying Bride and Paradise Lost) while managing to have a couple of elements that made it clear who was behind the music. The odd-sounding beats from the drum machine or the layering that resulted in a cacophony of melodies gave it away. It had Mories’ trademark sound, despite the actual music heavily borrowing from old masterpieces.

Present time and The Sombre is already on its third opus, Monuments Of Grief. Now, let’s not pretend this is a departure from the project’s previous two albums. Not at all. You like melodic death/doom from the 90s? Here you go. Blast this album. All the classic goodies are here. There are sorrowful riffs aplenty, as well as a never-ending stream of leads that bleed misery. The tempo is, obviously, pretty slow for the most part, but a few injections of fast drumming in tracks like “From The Depths Of Misery” and the title track create vibrant crescendos.

But when I took my nostalgia goggles off, I noticed a few things. Unfortunately some of these classic elements do not work as well as I hoped they would. The keyboards fluctuate in quality. The closer they get to a piano the better they sound, but as they approach a violin-like synth it sounds a tad cheap, which is odd, as I appreciated their sound much more in previous works, especially on the debut, which opens up with that very sound. The grunting growls match the grief of the songs, but as the album progresses, it is difficult to ignore their lack of variation. Clean vocals are scarcely used, which is unfortunate because I really enjoyed the painful, romantic atmosphere they conjured. This lack of variation runs through other aspects of the album. Once you have listened to Monuments Of Grief a few times, the songs start to blend into each other with little memorability. This feeling is further fueled by Monuments Of Grief having an even more traditional sound and less of that layering that gave the debut the "Mories touch". The songs, on their own, sound great to me, but they don't display as much staying power as an album. Fortunately, the album’s 38-minute runtime plays into The Sombre’s favor. I’d also say the second half of the album is considerably better, with much more powerful riffs and melodies; the last two songs in particular impressed me a lot for how moving the melodies were.

All in all, Monuments Of Grief is a good album for a quick fix of underground melodic death/doom. However, after three albums, I do wonder if there is more to this project than just nostalgia.