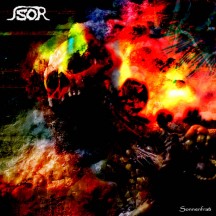 
Albums from one-man projects are quite often rougher around the edges than those from full bands, at least production-wise, but the singular vision of one person can often offer more creativity than the products of groupthink. Isor’s Sonnenfraß serves as testament to both these observations.

Every once in a while, a certain staff member pops up out of nowhere with a quality underground music find that I’d have no hope of encountering otherwise. Last year alone featured nominations in the Metal Storm Awards for several of these records, including Moriya’s Atma in the post-metal category and Isor’s Glaube in the industrial/cyber/electronic metal category. Glaube, the second album from German one-man project Isor, was an industrial metal album, but it was also a black metal album, and at times a dark ambient one. Coming hot on its tail is album number three, Sonnenfraß, which explores all these genres even deeper.

Black metal albums, particularly those made by one person, quite frequently are subject to a production job that could be generously described as ‘DIY’, and Sonnenfraß is no exception; however, in many cases, this rawness has a positive impact, and so it does here, particularly considering the noisy/ambient direction Isor takes their sound. The waves of undefined distortion, combined with the pounding, hypnotic repetitive industrial percussion, creates a mechanical aura, like the sound of a hellish factory in operation. Amidst the distortion of the foundation guitar, however, there are a myriad of other layers woven into the mix, some of them adding to the chaos, while others are almost uplifting, at least on opening track “Lichtjahre” and during the surprisingly melodic “Erinnerung”.

At other times, the music turns from ‘metallic ambience’ to pure ambience, such as in the sullen closing minutes of the title track. This ambience can take more than one form, however; the minimalism of this section of the title track is countered by the ominous second half of “Baraka”, where the percussion shifts from industrial to Middle Eastern sounds and rhythms, a vibe that is enhanced by distant vocals, horns, and other well-utilized sounds. Similar percussive approaches are used going forward into the rest of the album; the industrial influences persist, but somewhat alternate with livelier, more tom-oriented rhythms.

As already indicated, there is a roughness to Sonnenfraß, and this does extend beyond merely the production. “Weltenlicht”, which veers almost towards post-punk (the presence of a Killing Joke cover as a bonus track presumably implies that this is deliberate) between the percussion and the leading guitar melody, is a bit of an odd one out on the tracklist, particularly when it slips into a pyrotechnic guitar solo. The title track is also a tad rudimentary early on, as industrial rhythms and nondescript blackened guitars form an aimless march forwards that lacks the character of some other tracks on the record.

Still, this is an ambitiously varied record, and when ideas do come off, it’s very satisfying. The Middle Eastern influences on “Baraka”, in conjunction with the ritualistic ambient sounds of the closing double-header “I - Per Aspera.../II - Ad Astra”, add a depth to the atmosphere of Sonnenfraß, while the hypnotic pounding and melancholic melody of “Erinnerung” takes the record in an exciting different direction midway through. The blend of styles that made Glaube a worthy nomination last year have been built upon and enhanced this time around, with an end result that really stands out in an endless ocean of bedroom black metal projects, and it’s easy to embrace its imperfections with the knowledge that those imperfections can be crucial in the creative process for inspired records such as this.