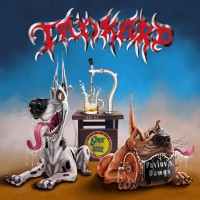 
I'll drink to that!

So, what will it be, stranger? Pour another fresh tankard of thrash, you say? Well, good news for you, that is exactly what's on tap with Pavlov's Dawgs. Eighteen albums in and still going, German alcoholics, I mean thrashers, Tankard have their hands to the tap yet again and serve up another hearty, refreshing pint of power and pit anthems.

Enough beer clichés? Never! Well, while alcohol may be at the heart of Tankard's members and music, the music has always been, first and foremost, the focus of the band's output and thankfully, the band are yet to forget this even through the haze of hangovers they must endure on a regular basis.

Like a cool, crisp, craft beer, the band serves up some well brewed bangers on Pavlov's Dawgs, with "Diary Of A Nihilist", "Veins Of Terra" and "Metal Cash Machine" showing the band have refined the brewing process during the course of their career and can still produce the suds. While the rest of the album may not be as well-brewed, tasting more like a Heineken than a craft beer (at least it's not Carling), it is still enjoyable, if not something that would be your first choice to order, à la "Dark Self Intruder" and "On The Day I'd Die".

Gutjahr and Thorwart remain the backbone of the band, with the former producing some solid solos such as on "Beerbarians", while the latter helps give the songs an expansive sound and extra dimension in the mix. Gerre once more gives the band its friendly every day sound, not the most talented singer, sure, but one that fits the tone and atmosphere perfectly.

It is when you can see the bottom of the glass after finishing up the album that you realise that Pavlov's Dawgs feels a bit pedestrian, like a drunk compelled to finish their drink even though they don't really want it. The music is enjoyable but nothing to get too excited about, with the music feeling laboured rather than inspired more often than not. It takes until "Diary Of A Nihilist" for the band to produce a great track, with the preceding three tracks like "Ex-Fluencer" being good, but not something I'm in a rush to hear again.

The aftertaste to the pedestrian tracks is the production on the album. While it does nothing wrong per se, with the mix being well-balanced and audible, it lacks any real power, which compounds the pedestrian feeling and highlights the weaknesses rather than minimises them.

Last orders are up folks, do you want another round of Pavlov's Dawgs, or would you rather finish up your evening ordering something more vibrant and different?

Written on 26.09.2022 by
omne metallum
Just because I don't care doesn't mean I'm not listening.
More reviews by omne metallum ››