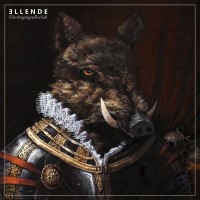 Austria has already proven itself as a pretty fertile ground for black metal that is melodic, atmospheric, and melancholic. Though Summoning did lay the seeds for an entire subgenre of Summoning-core, their Tolkien-inspired sound is less relevant for this point than Dornenreich's progressive blend of dark folk and melodic black metal. This did lead to the 2010s being especially lucrative for some gaze injections for bands like Harakiri For The Sky, Karg, and Anomalie. One of the bands that joined that scene and that has always been pretty impressive was Ellende. Though my first contact with them has been due to mistaking them for Elend, and I doubt I was the only one, they were pretty quick to hone in something in their entire presentation that was pretty distinguishable. But something was keeping me from fully appreciating that in the grander post-black metal scene. Ellenbogengesellschaft brings them closer to that.

There's quite a lot to Ellende's music that is pretty in line to what you would expect from this niche of black metal. A lot of blasting, shrieking vocals that border on DSBM, melodious moments, long-drawn atmospheric passages, and all that jazz. Ellende always liked to merge the emotional impact with its sense of atmosphere, and previous releases were apt enough at getting them some of the recognition they deserve, but they still felt like they packed more potential than an actual finished package. There's something in the way Ellenbogengesellschaft flows that fulfils some of that potential. For one, it is worth mentioning that Ellende is sort of a one-man band, with the studio lineup consisting of only one drummer alongside the mainman L.G., so there is some clunkiness that comes from a single person trying to create a band's sound, something that feels more organic this time around.

Not only is the production a lot clearer this time around, leading to something a bit more engaging, but the sound reintroduces more of the classical instrumentation, from pianos to string instruments, to keep the sound palette from feeling stale. The interludes this time around, which is where a lot of this classical instrumentation gets to shine, feel more in harmony with the rest of the album than previously, with "Someday" especially being a really beautiful track as a result. Instrumental palette aside, the vocal side also has a better share of cleans and especially of choral voices this time around, and as far as harsh vocals are concerned, it's nice hearing a guest spot from Harakiri For The Sky's J.J. on "Ruhelos" to break away from the slightly monotonous feeling of L.G.'s shrieks.

All of these work towards a sound both fiery and mournful, as if a world not yet willing to lie on its deathbed.

Written on 04.10.2022 by
RaduP
Doesn't matter that much to me if you agree with me, as long as you checked the album out.
More reviews by RaduP ››