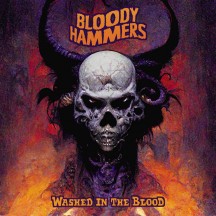 Lo-fi shock rockers Bloody Hammers are a band whose careers mirrors that of their lo-fi style in that they have long flown under the radar. While last year's Songs Of Unspeakable Terror suggested a downturn in the band's fortunes, it's only with the quick turnaround between albums and the release of 2022's Washed In Blood that this trajectory is somewhat confirmed.

While Washed In Blood continues in the same vein as the band's previous efforts, it is a well still deep and one that sounds like it's far from running dry anytime soon. The opening one-two of "Black Sunday"  and "Phantasmagoria" reminds you of why Bloody Hammers entered your radar all those years ago. "At Midnight I'll Take Your Soul" and "Dead Will Walk" suggest that the band is still able to reach deep into that well and pull up a full bucket of riffs and catchy rock numbers to sustain even the most powerful of thirsts.

Anders Manga's almost B-movie sound is still more compelling than the A-list Rob Zombie brand of shock horror, with the punk-infused minimalist sound of Bloody Hammers being retained once more. Though there is little in terms of advancement of this sound beyond the new wave-esque gothic vibes of album closer "Don't Be Afraid Of The Dark", it is a sound that is far from sounding stale (though it is in need of one or two more new hits).

Bloody Hammers have long made a habit of producing understated, but no less hard-hitting, tracks based around an ear-catching riff or instantly memorable vocal hook. While "Phantasmagoria" fits this bill, Washed In Blood is lacking in quality and quantity of these types of tracks, to its detriment; yes, there are moments such as "The Howling" where it comes close, but it just isn't at the same level that the band has conditioned fans to expect following a string of strong releases.

This is perhaps the biggest issue with Washed In Blood: it feels rushed and like the band put all the ideas they had accumulated onto the album rather than waiting until they had amassed an album full of quality, a feeling supported by the fact that alongside last year's Songs Of Unspeakable Terror both limp over the half-hour mark in length. If the well is still deep with water, the band are pulling up the bucket when it is half-full rather than waiting for it to overflow.

While I appreciate not having to wait very long between releases, Bloody Hammers could perhaps do with taking a bit more time in releasing new material. Washed In Blood isn't a bad as such, but it feels like it was pulled out of the oven too soon and is undercooked as a result; it is filling, but not the flavour fiesta you had hoped for.

Written on 19.10.2022 by
omne metallum
Just because I don't care doesn't mean I'm not listening.
More reviews by omne metallum ››