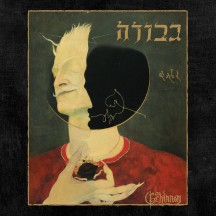 
You could easily fool some that Gevurah are a Polish black metal band.

I know that a band's sound isn't necessarily an indicator of its national origin, but also scenes, particularly black metal ones, have evolved to have some common defining characteristics, whether the vulgar relentlessness of the South American scene, the icy riffs of the Norwegian one, the dissonance of the Icelandic one, and so on. So everything from the sound to the presentation could fall into something that is very stereotypical for a black metal scene. Take Gevurah, whose meaty riffs and the way they build some death metal atmospheres feels very Behemoth inspired, all the while taking cues from Batushka and Mgła. That said, Gevurah come from Quebec.

Quebec has a very potent black metal scene itself, so it is a bit unusual hearing a band from its scene sounding more like Hate than Fortresse, but also the deathened black (think inverted blackened death) sound of Gevurah is pretty universal, and something that the band has been polishing for more than a decade. This being the band's third full-length, there's quite the journey that led to Gehinnom. But there's something about the entire presentation of the album, from the superb cover art, to the latin in the tracklist, that it sometimes feel like all it takes is me spotting any "Ov" in a track title to mistake them for a better Behemoth album than the one we got this year.

Now that we got the Behemoth similarities out of the way, Gehinnom is a banger. The music is fierce, the occult presentation is entrancing, the performances are hard-hitting, the bass is lumbering, the drummer is a beast, and the riffs are neck-breakers, all to the point where it actually feels like the vocals are the weak link, and they're definitely good vocals, but they feel more uninteresting relative to how dynamic everything else feels. Even in its less fierce moments, the album finds some atmospheric bits akin to some Regarde Les Hommes Tomber to make the album even more expansive, and all of it still culminates so triumphantly in the 13-minutes closer.

With an album title that in Judaism represents the realm of the afterlife where unrepentant souls are cleansed of their spiritual impurities before returning to the presence of God, I sure feel as cleansed as can be after listening to it.

Written on 26.10.2022 by
RaduP
Doesn't matter that much to me if you agree with me, as long as you checked the album out.
More reviews by RaduP ››