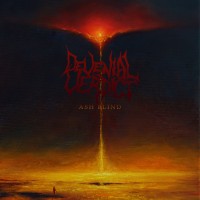 
So here we have Finland's death metal prospect Devenial Verdict, a band that brings a fresh stylistic approach to the extreme genre of death metal, focusing heavily on atmosphere, as well as sheer heaviness and brutality. On this album, Ash Blind, these elements are so plain to hear; the atmosphere sure as hell doesn't let you down, and calling this album brutal is a mere understatement.

Amazingly, this is the band's first full-length release since their formation in 2006, following two previous EPs, the last of which was released six years ago, so clearly this isn't the most active of bands around, but they have certainly left their mark with this release.

The flow from beginning to end is ferocious and brutal, with each track interlocking effortlessly into one another, whilst a persistent powerful and captivating force remains consistent throughout its structure. However chaotic this album may seem, each track contains its own distinctive qualities, from the title track's eerie opening build-up that leads you on an ever growing journey of intensity and anticipation, through to the interlude of "Mourning Star", which acts as a bridge to provide a natural flow from “Sun Hammer" to “The Contemptor”, providing the listener with a breather before "The Contemptor"s early onslaught.

I would best describe this album as like being sent on a relentless and forceful wild rollercoaster ride with a high level of intensity and emotion. As far as the atmosphere goes, well, it's uncomfortable to say the least; it's dense, it's as if the album simply grabs the listener by the balls and drags you into a hellish pit of emotional doom from which there is no escape. A lot of this hellish atmosphere is made up by the unusually powerful-sounding guitar tone, which has a Lovecraftian horror vibe to it, very similar in style to that of Blut Aus Nord, I have to say.

The sound is then made all the more dense and claustrophobic by the powerful, soul-crushing discordant riffs and thunderous bass lines that just keep on slamming and pounding away, building up very much in a death doom-paced manner. Through the chaos you have these slower-paced riff sections alongside the hypnotic rhythmic drumming beats, which sets a mood and tempo very similar to that of Ulcerate, but then on the other hand you get the grooviness and heaviness of the mighty Morbid Angel.

Each musician brings something special to the table to allow this structure to happen, from the vocal performance brought to you by Saressalo (bringing a guttural and throaty coarse yelling as opposed to plain simple death growls, a style that proves to work so effectively with this type of music), to Frigren, who brings his polarising shred-like solos. It also goes without saying that the production on this album is very impressive; all the elements are so tightly compacted together, but at the same time nothing gets drowned in the mix, allowing each instrument to shine through the sheer madness.

To summarize it all, Ash Blind is by no means an easy listen; it's chaotic, it's undeniably brutal and the atmosphere sends you as a listener on an uncomfortable wild ride of intense emotions. If this full-length debut is anything to go by, I can only look forward to hearing what these Finns have in store for us next.