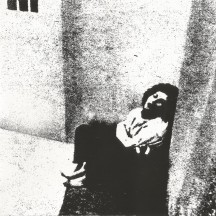 
For me, the main point of extreme art is to shock a person’s very core and make them question their surroundings. To distort someone's senses and make reality clash with their wildest dreams and nightmares from their deep subconsciousness. This is one of those pieces of art.

My favorite media to achieve this level of enhanced awareness are movies and music. As I discovered metal, I slowly became more and more addicted to extreme visual and auditory stimuli. When you tap into a state of mind filled with horror, a primal instinct for survival is unlocked. It reaches a boiling point in which you feel very much alive. It becomes a ritual. You force yourself to confront absolute horror so that you can reach a high filled with adrenaline. There have been many bands that I used to experiment with in order to reach that state; Gnaw Their Tongues, Khanate and Lurker Of Chalice are among those. But it’s safe to say that, by the mere nature of this work, Today Is The Day’s Sadness Will Prevail is the most arduous ritual of fear and anxiety I have ever faced. That was almost 10 years ago.

I was already well-versed on some of the sonic terror created by Steve Austin at the time. Temple Of The Morning Star and In The Eyes Of God were works in constant rotation. But Sadness Will Prevail eluded me for a while even when I already had the album in my hands. Things had to be done right. At midnight, while all the folks were gone, I switched off all the lights and sat on my bed by the corner of my room in complete darkness and hit play. The high-pitched screams came crashing down on me like sharp pieces of glass.

The caustic riffs stuck to my skin like viscous tar. The bass and drums hit my chest with the force of a spiked bat. But the thing that shocked me the most was the use of unconventional instruments. Because more terrifying than all the other previously named elements, insane vocals included, was the inclusion of chimes, violin and piano. There truly is no moment of peace and solace to be found on this record. Everything is designed to cause discomfort. To use these instruments to create sonic horror of this caliber demands incredible songwriting. Tracks like “Butterflies”, “Death Requiem” and “The Ivory Of Self Hatred” will annihilate any sense of security. The sounds made by those otherwise beautiful instruments are nothing short of hellish, blasphemous and surreal. It is the mother of all contrasts. The schizophrenic songwriting holds no real agenda outside of torture and scorn. You can attach labels to it though. It is sludge metal, noise rock, hardcore, ambient, even neo-classical and jazz. But all that holds little weight in comparison to the main objective: To break you.

I begged for the album to be over as soon as the final screams looped on and on during the very ending of the last track. But I begged in vain. Because it was the final track of the first CD.

Now, is there really a distinction between both CDs? I would say that there might be more soothing moments (perhaps “less terrifying” would be the right term) to be found in the second half of this work. Despite what the name suggests, “Your Life Is Over” is surprisingly blissful. Many tracks are also much more rocking, with heavy and catchy riffs like on “Myriad Spaceship” and “Control The Media”. Although there is also “Never Answer The Phone”, a bizarre, almost orchestral, 23-minute instrumental hymn to mental instability that is as unnerving as the cryptic title hints at.

I think the real answer to this question depends on how you approach Sadness Will Prevail. If you listen to the albums separately, I don’t think you will find that many differences. You’ll find the same breed of experimental sludge/noise rock. The impact is completely different if you decide to experience both records in a row though. Once the spirit has been broken and demoralized by the first album’s end, there is nothing that stops Today Is The Day from really messing you up. All barriers have been torn down and the listener enters a state of heightened suggestibility. It’s easier that way to get lost and stare at the ceiling with a dead look on your face, much like the poor person on the album’s cover.

30 tracks over the span of almost 2,5 hours: making it through this album is a trek. But not in the way that most long albums are. The songwriting remains interesting and unique throughout the whole ordeal. This is about mental endurance. Almost physical. Many times have I stopped after the first CD because of how uncomfortable I feel. How I feel watched, haunted and unsafe in my own home. Sadness Will Prevail is a horrifying journey. The soundtrack for all that is wrong, depraved and inhumane with the world. But this devastating journey is also incredibly beautiful. For it makes me feel aware of all things. It makes me feel alive.

This has been yours' truly's 100th review.