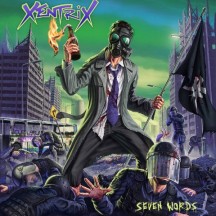 
There was me thinking they were covering George Carlin.

Timing is everything, with Xentrix perhaps learning this the hard way; their heyday came during the dying days of thrash in the late 80's and early 90's, denying them a career more vaunted than they have.

With 2019's Bury The Pain giving the band a foothold in the thrash scene beyond being a band living off of past glories, 2022's Seven Words sees Xentrix getting a firm footing unto which they can get their heads above the parapet and make their presence known to a larger audience.

Kicking proceedings off in style, "Behind The Walls Of Treachery" sets an early bar and puts any worries that Bury The Pain was a fluke to rest. The band alternate between thrash assault and locking into a groove with effective results, with "Everyone Loves You When You're Dead" and "Kill And Protect" testing your neck muscles between headbanging and grooving.

"My War" and "Reckless With A Smile" highlight the musicianship on offer, with Havard and Walsh producing some solid guitar riffage, while Shires and Gasser make for a compelling rhythm section. When the band locks into a groove, Seven Words is at its best, hitting hard while getting you moving.

Ironically, it is when the band focus on straightforward thrash that Seven Words is at its weakest. Walsh's barked delivery is powerful, yet it is very monotonus and overused, leading to several tracks like "Spit Coin" and "The Alter Of Nothing" blending into the thrash scene with little to stand out from the crowd. "Ghost Tape Number 10" and the title track play out to little fanfare, even though there are moments during these tracks (the breakdown and solo of the former track for example) that tease what could have been, before the rest of the song plays out.

Fans of the band will be glad that Bury The Pain isn't the lone release from Xentrix's return to the studio, as fans of thrash will hopefully discover the band and delve deeper into their rich history. Seven Words is unlikely to rank too highly in their discography, but it has its moments that will warrant returning to it before it gathers dust on your shelves.

Written on 16.11.2022 by
omne metallum
Just because I don't care doesn't mean I'm not listening.
More reviews by omne metallum ››