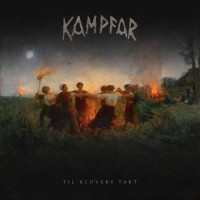 
Since the early '90s, you could say that Kampfar has remained pretty much in the background of things, despite managing to present us with a fairly strong and consistent discography. Well, hopefully now times will change for the band, as they present to us their ninth release, Til Klovers Takt, which I have to say is a very solid release indeed. But will it give Kampfar the recognition some would say they truly deserve?

Kampfar emerged onto the Norwegian black metal scene after forming in 1994 and have focused their attention ever since towards the old traditional pagan culture for their lyrical content and themed approach - that is, rather than focusing on the traditional raw, Satanic approach that was more infamously used at the beginning of the Norwegian black metal scene. You can easily say Kampfar's style of black metal very much leans towards that of bands such as Windir, early Ulver, and early Borknagar, rather than the likes of Darkthrone, Mayhem, Gorgoroth, and, well, you know... the rest. Although Kampfar are relatively unknown in comparison to those other bands I mentioned, they have remained one of the most consistent Norwegian black metal bands around, with some highly impressive releases, many of which have unfortunately fallen under the radar.

Kampfar are a band that you can say have never strayed too far away from their original roots, with only minor changes over time that have led them to where they are now; the most notable change is in their sound quality, which is mostly due to their impressive production. That now brings me to this latest release: it's incredibly well mixed, and despite its dense structure, every element shines through whilst the band stays within its traditional lo-fi sound. You will also notice that the tracks on this album are much longer than average; this is made necessary for Kampfar, as they wanted each track to develop its own individual atmosphere and identity.

The title and atmospheric theme behind Til Klovers Takt take inspiration from the scenic landscapes of Norway’s Scandinavian Mountains, in particular the valley of Hallingdal, one of Norway’s major eastern valleys. The album begins in dramatic fashion with "Lausdans Under Stjernene", an opening track that throws the listener straight into the midst of madness with its sheer ferocity and epic structure; this gives the listener a clear indication early on of how the band will approach of this album.

The various vocal styles are striking, most notably the occasional chanting; this for me is what gives off that "pagan ritual" effect, something I believe Kampfar had intended and managed to pull off really well. But then, Dolk’s vocal performance all around is very impressive to say the least, as he brings so much diversity and range to the sound. The bass lines and guitar work are also very well thought of and structured excellently, but it's the drumming performance that impresses me most, from the tribal pounding on "Urkraft" to the thunderous blast beats of “Fandens Trall” and “Flammen Fra Nord”.

Although Kampfar haven't necessarily released anything you could consider groundbreaking as such in recent years, Til Klovers Takt may be an exception, as it could well be considered one of their best releases to date, if not their best - in my humble opinion, that is. Regardless, you have to give the band credit where it's due: Til Klovers Takt is an impressive album, one that I would say (and hopefully you will agree) will finally bring Kampfar's name to light.