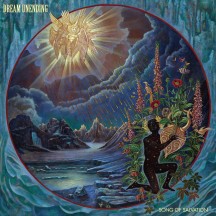 
Derrick Vella of Tomb Mold and Justin DeTore of Innumerable Forms are diving deep into the world of dreams. Last year, Dream Unending’s debut LP was tagged as ‘dream doom’, and this term still very much applies to their second album. '4ADoom' also sounds apt.

Death doom metal is a genre that, most of the time, feels devastating, oppressive, miserable, and bleak. Dream Unending’s music, on the other hand, is ethereal, lush, ascending, and… dreamy. Song Of Salvation doesn’t crush you; it washes over you. There are so many layers of guitars, synths, and other sounds -like the murmurs on “Murmur Of Voices”- that the album is better experienced when listened through headphones. Arthur Rizk’s production is pristine and allows all these different aspects to come out to the surface. The cover art by Benjamin A. Vierling magnetizes as well.

Still, Dream Unending are not trailblazers; having clean guitars over crushing riffs is what diSEMBOWELMENT were doing way back in the ‘90s, but that kind of fulfilling aural experience in the doom genre is hard to find. The leads are aping David Gilmour and Joe Satriani, and they add a flavour that is so soulful and emotive, especially on the instrumental “Unrequited”. While listening to this album, I am reminded of many beloved bands in sound and mood, from Anathema to The Blue Nile, from Esoteric to The Cure, and from The Ruins Of Beverast to Cocteau Twins. Only two minutes and twenty seconds into the opening title track, I hear the riff of “Shattered” from Paradise Lost’s Gothic album. Then, there are times when I recognize the progressive colourfulness of Cynic’s Focus or others that I expect Type O Negative’s Peter Steele to resurrect and start singing. And yet, despite all the namedropping, this album sounds so unique.

Compared to Tide Turns Eternal, Song Of Salvation feels a bit lighter and more airy. But not by much; only to the point of the two not being identical twins. But both albums are embracing the state of reverie; a state of mind that is partly unconscious, partly hallucinatory, and thoroughly enlightening. It is difficult and confusing to explain with words something that sounds so elusive and cinematic, but at the same time feels so familiar; like a déjà vu.

The guests on this album are also killing it. Phil Swanson’s electric vocals, heard from a distance, and Leila Abdul-Rauf’s jazzy trumpet are taking “Secret Grief” from the hand for a walk through the haze. McKenna Rae’s beautiful voice captivates the soul, and Richard Poe’s narration hypnotizes the mind on “Ecstatic Reign”. This final song, along with the opening title track, are the two gigantic pillars that Song Of Salvation stands on, but the middle is also very much worth exploring.

If the dream scene in Akira Kurosawa’s Kagemusha were 43-minutes long, this could have made a great soundtrack.