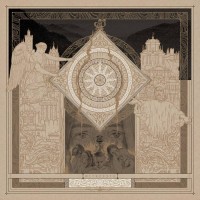 
So this here is the Italian doom metal band (EchO), bringing to you their fourth release, Witnesses, one that features a guest list of artists from bands such as Draconian, Evoken and October Tide. Witnesses is as you might have guessed by now, a pandemic-influenced release, which in turn means a hard-hitting ride of emotional discomfort that hopefully the listener will look back at and remember. This should paint a picture of what this atmospheric doom metal band has in store for you.

Now, if there's one thing for certain, it's that you can clearly tell that (EchO) had put a lot of work into creating this, despite the lack of rehearsal time the musicians had together. Starting with the variety of exquisite vocal performances, from Fabio Urietti's harsh growling verses, to his gothic clean choruses, to the additional growls of October Tide's Alexander Högbom on the track "Laudanum", and especially Heike Langhans' beautiful enchanting guest vocals on the tracks "My Covenant" and "Chemical". This is a great example of how the beauty and the beast vocal style can work so effectively. The guitar work is so masterfully crafted too, and definitely worth taking note of, especially where the lead guitar solos are concerned, which for me is one of the most memorable highlighted areas to feature on the album.

Having said all that, the album's structure as a whole is quite remarkable. There is so much layering to the construction, which I have to say for the most part is very well mixed and finely produced. The slower synth passages are also very effective, as they help balance out the overall atmospheric setting, providing an epic and emotional feel to the album's sound, whilst on the other hand, the heavy sludge-styled riffs work effectively alongside the heavy bass and meaty guitar tone to create the overall heavy doom approach. The flow is mostly well organised, with regular changes in tempo that go from gentle and soft, to heavy and hard-hitting, with moments that hit the listener with a sense of depression and anguish, followed by passages that are then uplifting. If there's one thing (EchO) provides, it's a flow that provides the listener with an ever-changing mood setting.

Witnesses basically starts with an instrumental track less than a minute long, which is hardly an introduction at all, but it isn't long before the album really gets going, with the next few tracks containing hooky grooves from their catchy choruses, heavy melodic riffing and outstanding clean-driven guitar leads, all of which have an up-tempo feel. The album runs pretty smoothly, but it's not until you reach "My Covenant", which sets in motion a gloomy atmosphere, that the album starts to get really interesting. The track itself leans more towards an atmospheric gothic rock style as opposed to atmospheric doom, mainly due to the slower tempo and softer sounding approach, perfectly suited for Langhans' vocals to shine of course.

The songwriting does, however, lack overall consistency, with the standard of some tracks falling short from others; this is perhaps due to the lack of rehearsal time the musicians had leading up to the release of this record. Anyhow, (EchO) have proven once again to be more than capable of providing such a unique range of styles and quality musicianship. Even if this isn't necessarily their best release, it holds some solid material that most metalheads will enjoy.