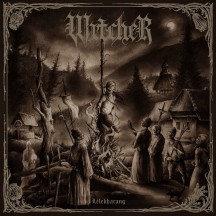 
The soul bell is chiming, accompanied by melody-driven, cosily atmospheric black metal. With relatively long songs built by just a few different sections each, this is music that lives or dies by the quality of its melodies.

Something tells me that the songs on Lélekharang (Soul Bell) were all composed on the piano to begin with. It might be, oh I don’t know, because of the ubiquitous use of piano, or because of the album ending with a performance of a Beethoven piano sonata, or because of the way most of the songs begin with a cappella piano sections introducing the main motif before the drums, bass, guitar and harsh vocals enter to repeat the same motif over and over enough times to warrant a band like Moonsorrow to sit up and take notice, or…

There are more similarities between Witcher and Moonsorrow than just the lengths to which they will go to churn out the same patterns in repetition, however. In fact, most of Lélekharang reminds me of one particular Moonsorrow song: “Huuto”. It might be, oh I don’t know, because of the ubiquitous use of keys repeating the motif behind the rest of the instruments, or because of the ballsy use of just a few select riffs to build songs as long as 10 minutes, or because of the rhythmic, accentuating shrieked vocals, or…

Witcher ain’t no simple Moonsorrow ripoff; there is more to this band than only that, but this is a similarity I can’t help but notice every time I listen to Lélekharang. In fact, Witcher plays a very soothing brand of black metal, rather than the “Viking raid” brand of Moonsorrow, but the basic elements are quite much the same. All the songs on the album follow the same pattern; there is not much in the way of compositional variety, trickery, or anything mildly progressive about it, and that’s completely fine, as long as the melodies and moods conjured up by these simple elements are good enough to keep your attention for up to 10 minutes at a time. The melodies on Lélekharang are minor-key, folksy-to-classical, and constantly moving at a slow-to-mid pace. There is not much in the way of harmonisation, voicing, counterpoint or any of that music-theoretical mumbo-jumbo - no, the full band plays one single melody at a time, the vocals harshly whisper forth Hungarian stories about ancient, mystical times, and that’s pretty much it.

Thus, as I mentioned in the introduction, this is music that lives or dies by the quality of its melodies. Not the riffs, not the performance, and not the lyrics (who understands Hungarian anyway?). With songs composed of just a few select, repeated melodies, and the riffs consisting of nothing more than these melodies played in tremolo, what else could Witcher live or die by? Luckily for Witcher, most of these melodies truly deserve to be repeated for many minutes at a time. They create images of fog-covered, olden hinterlands replete with magic and monsters (much like the book, video game, and series franchise they share their name with). Listening to Lélekharang feels like walking on a narrow path through the woods at night, every tree and bush looking much the same, but conferring an initial sense of mystery and wonder that eventually turns into a sort of cosy familiarity.

The title track’s main motif is a sort of two-pronged, descending melody that will worm its way into your brain no matter how much you resist, and the string arpeggio-driven “Csendesen” (Quietly) has a sort of Beethoven-meets-role-playing-game-music quality to it that is made all the more effective by the rhythmic punctuation of the vocals. “Hazatérés” (Homecoming) might be a bit too long for its own good, but ends with a tremolo-driven section that, while not upping the tempo, progresses somewhat faster than most of the album, making me realise that for all its good aspects, Lélekharang is not a particularly dynamic album; the songs are all made up of the same elements being played in the same tempo with very few and after-the-fact predictable twists and turns.

If this sounds like it could make Witcher’s music come off as monotonous - well, that’s because it is monotonous, and that’s obviously the idea here. The production also leaves something to be desired: I notice some clipping in the piano recordings which becomes a little bit too apparent when listening on very high volume (which, for the record, I always do), the vocals are generally too sibilant, and there is one particular keyboard sound - the chiming of the titular “soul bell”, I assume - that is way too high in the mix and tends to ring out with an all too trebly tone; also not ideal for very loud listening.

Lélekharang ends with a surprisingly not unnecessary rendition of Beethoven’s “Moonlight Sonata” (which happens to be one of my absolute favourite pieces of music), where majestic strings and sparse cymbal hits accentuate the piano piece in admirable fashion. Perhaps it is the Beethoven influence that make the melodies on Lélekharang so powerful - or perhaps it’s just the use of C# minor, the grandest and most emotional of all keys. If you like your black metal cosy and soothing, this is for you.