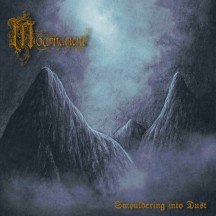 
Amusingly, I fired Smouldering Into Dust up for another round while typing the review and midway through the opening track, “On Rain And Thunder” a freak hail & thunderstorm set off, killing our power. Talk about setting the mood.

So, Mournument hail from the land of Malbec, “Completo” hot dogs and Roddy before his parents sold him into indentured servitude to work the IKEA mines of arctic Sweden. That’d be Chile if you are still unclear. And they play folk doom.

Well, it’s sort of standard funeral doom, only with acoustic guitar. And strings at times. They also mix in clean sung harmonies and almost Viking-like chants, which for stretches of time might have you questioning if you accidentally clicked Monumension rather than Mournument. Ok, maybe it doesn’t sound quite like anything off of that particular album, but it did have an Enslaved-like quality to it.

In general, I do like the acoustic nylon/classical guitars. Whereas other funeral doom acts like Skepticism might use an organ to lead a song off with an imposing sense of ominous grandeur with a side helping of dread, the guitar creates an aura of fragile beauty, calm before or a temporary respite from the slo-mo storm, as is greatly exhibited in the mid-section of “Chasm of Abandoned Souls”.

I will say that the entirely clean following song, “Sea Of Desperation” does serve as a nice lulling passage, it does perhaps overstay it’s welcome a little bit… making the return of the doom with the far more familiar sounding “A Funeral Poem” giving you the feeling of walking out of your airport after a long trip away. You’re home. You’re back in Doom County.

While not a mind-blowing, life-changing experience, I did rather enjoy Smouldering Into Dust and I am looking forward to what Mournument do next.

Bandcamp Was The Chant Of My Endless Autumn.