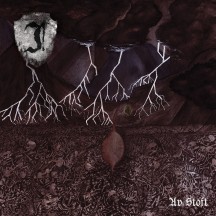 
Another day, another black metal album with disturbing lyrical content recommended by Nejde. Jordfäst plays a stripped-down, thrashy sort of Viking black - sort of as if Moonsorrow copulated with Watain. Despite the vast lengths, these two songs are mostly riffs upon riffs upon riffs upon excellent vocal delivery. There are no folk instruments on Av Stoft (Of Dust), and while it features some tasteful male choirs at times, the folk influence on display here comes more or less singularly from the unmistakably Nordic-sounding melodies the riffs are made out of.

The riffs, man. On Av Stoft, Jordfäst (Earthbound, as in "six feet under") wastes no time getting to the seriously headbangable content available. The first half of the album, "Abortologen" (The Abortionologist) starts out with a fast-paced, folk-tinged thrashy black metal assault accompanied by superbly controlled percussive screams in Swedish telling the story of a young Christian girl who is made pregnant by a priest and dies as a result of the abortion forced upon her to cover up their sins. The song is full of excellent riffs, energetic drumming, and catchy vocal parts, and transitions from highlight to highlight without much regard for breathing room or crescendos - just a multitude of powerful sections stacked next to each other for 15 minutes.

A very short choral intro leads into a folksy doom riff - where the rhythm guitar notably plays tremolo - that soon explodes into a groovy, thrashing section supported by precise and furious drumming as the singer viciously introduces the dilemma of the story’s protagonist. Gang vocals are subtly used to good effect to accentuate some of the more upsetting lyric lines, as the rhythm guitar transitions into a sort of bouncy pattern and the lead guitar plays slowly soaring harmonies on top of it. Both songs are (needlessly, as they work best as a whole) divided into shorter tracks (at least on streaming services), but it does make it easier for me to pinpoint parts of them. “Abortologen, Pt. 1” ends with a chorus that will return several times over its runtime, with singer Olof Bengtsson screaming over a straight four-beat:


The lyrics are written in a quite archaic, poetic style and some of the nuance will be lost in translation, but suffice to say a lot of thought seems to have been put into the choice of words here, both for storytelling purposes and the sweet contrast of melodic vowels and sharp consonants brought by the use of Swedish. The second part of “Abortologen” consists mainly of a lengthy and surprisingly hard-rocking guitar solo, the third part ramps up the intensity with speedy vocal delivery and blast beats, and in “Abortologen, Pt. 4”, the rhythm guitar takes centre stage to blast out a pulsating, danceable pizzicatto-like riff that is soon complemented by equally rhythmically powerful vocals. Olof is snarling and hissing like a striking viper on steroids, and composer Elis Edin Markskog decimates the other instruments with great precision and enthusiasm. It is all finished off with a faux ending that catches me off guard every time: “Polej, säven, STOOORM!” (Ah, spoiler alert!) In case it wasn’t already obvious, “Abortologen” is the shit.

We have half of the album left to deal with, however. 15 more minutes of this sort of intensity might be too much, so where to go next? “Kom Eld, Kom Regn” (Come Fire, Come Rain) follows a quite different recipe, and features more heavily a Viking metal influence, with the main choir motif bringing Moonsorrow’s “Mímisbrunn” to mind, and settling for a more mid-pace delivery. Rather than the tornado of riff-jumping that was “Abortologen”, “Kom Eld, Kom Regn” starts out with a long section of a repeated chord progression as we are being told the story of a man on a ship, setting sail for foreign shores… or, as it turns out, actually leaving his family and life behind to set fire to his ship and die on the ocean. At times, it is a bit too repetitive for my liking, but when the whirlwind riff enters that leads up to the chorus chanting/screaming the song title, I’m thoroughly re-engaged each time.