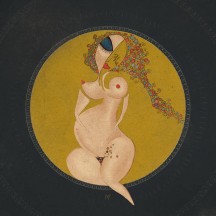 
The djent craze at the beginning of last decade came in the form of two prevailing trends: the Periphery-style prog-metalcore and the guitar virtuoso solo projects. Concerning the latter camp, many of you will be familiar with Plini; fewer of you may be as well acquainted with the other major players in this scene, such as David Maxim Micic, but he’s back with the latest entry into the Bilo series to remind everyone why he stood, and stands, out from the pack.

Micic’s endeavours under his own name kicked off with annual entries in the aforementioned Bilo series, with 2011’s Bilo 1.0 and 2012’s Bilo 2.0 EPs swiftly followed by full-length debut Bilo 3.0. However, after that, the series went on ice for a while; in the following decade, he released albums as part of two separate but related bands, Destiny Potato and Sordid Pink, with 2015’s Ego and Echo EPs and 2017’s Who Bit The Moon the only records released as a solo artist. Nine years on from the third entry, Micic has finally brought to fruition Bilo IV.

If this is your first taste of David Maxim Micic, then the first few tracks might leave you thinking that he’s very much a kindred spirit of the likes of Sithu Aye, with plenty of sad-tinged, super-melodic lead guitar features on the likes of “Of Bliss” and “Dx2 Is Me”. However, there are a few things that have historically distinguished Micic from the crowd, and they get progressively revealed. To start with, while the labelling of Plini as part of the djent scene feels increasingly tenuous as time goes on, there is a real crunch to the riffing at times on the Bilo records, and to some extent Who Bit The Moon, and while it's generally less present on this softer, more 'cinematic' record, that crunch is very evident on an early-album cut like “Itch_ˈnʌθɪŋ_”. Second, while Micic is clearly an incredibly talented guitarist, his music hasn’t necessarily been the showiest in terms of lead guitar pyrotechnics, and that remains the case here; by the end of “Fading Memories”, the sixth of 11 tracks, there has been little in the way of real shredding to note, Micic opting for more measured and tasteful guitarwork instead.

Perhaps one reason for this approach has been the real song-driven nature of Micic’s writing over time; back on Bilo 3.0, despite the presence of guitar virtuosos such as Jeff Loomus, Jakub Zytecki and Per Nilsson, the songs felt like proper prog-metal ventures rather than straight shredfests. A lot of that comes from the fact that Bilo 3.0, and now Bilo IV, are not purely instrumental; the likes of Vladimir Lalič (Abonos), plus Micic’s Destiny Potato ex-bandmates Aleksandra Radosavljevic and Aleksandra Djelmas (also in Sordid Pink), play crucial roles as vocalists on these records. For Bilo IV, it is the point at which Djelmas and Lalič enter the fray that the album transforms.

Up to this point, it is another good djent-tinged mellow instrumental prog release, one with euphoric melodies, chunky riffs, and soothing ambiance, but it doesn’t do all that much beyond that to stand out, whether compared to his own material on the likes of Who Bit The Moon or that written by the likes of Sithu Aye. “Away” is the first vocal feature, a gentle soothing (until the djenty climax) segue into the song that really defines Bilo IV: “Cry”. From quiet, atmospheric beginnings, this song builds based off of Lalič’s performance, one that lends the track a slight Devin Townsend feel in terms of the subtle theatricality when he’s at his most expressive in the chorus, only for Djelmas to take over halfway through for a passage that embodies the sci-fi ominous serenity of Coma Ecliptic-era Between The Buried And Me (at least, the quieter moments of Coma Ecliptic).

“Cry” is a compellingly well-written song that carries on from where some of the material on Bilo 3.0 left off; it’s followed by a nice soft-to-loud instrumental piece in “Of Hope” before Micic takes a second bite at the cherry. The equally lengthy “Wedding” features more of the range, flow and versatility that makes “Cry” so good, albeit in a more vibrant and exuberant form (this time, Djelmas gets to move out of ‘soft and understated’ form and truly unleash her talents). With one more subtle denouement in “Are We There Yet?”, Bilo IV is capped off nicely.

In terms of individual components, this is a very solid record. However, I do feel like it’s a bit of an awkward experience as a complete package; you have a pleasant, if slightly lightweight, opening half, then suddenly it turns into an album with vocals, and just as suddenly it turns into one with dramatic prog epics. Compared with Who Bit The Moon, which interwove the shorter ‘interlude’-style pieces between the ‘proper’ tracks, or Bilo 3.0, which spreads its songs and instrumentals fairly evening, I do find Bilo IV to be a tad odd. I’m sure there’s some conceptual purpose to it, but without that knowledge, I do find myself looking at the album as being a tad fragmented and inconsistent, particularly since "Wedding" and especially "Cry" so clearly dominate the record in terms of standout moments.

Nevertheless, it’s a very pleasant comeback from one of the most interesting voices in the modern instrumental prog scene (a scene that is already more to my tastes than the shredfests of decades past), and one that highlights both his hugely tasteful musicianship and his compositional talents.

Written on 12.12.2022 by
musclassia
Hey chief let's talk why not
More reviews by musclassia ››