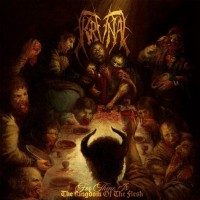 
For Thine Is The Kingdom Of The Flesh is the second release by the new and impressive solo Australian melodic black metal project Krvna. This was released exactly one year to the date of the release of debut record Sempinfernus, and if traditional melodic black metal with ferociously fast tempo and catchy riffs is your thing, then I simply must recommend you give this one a shot, as this one-man act is certainly looking like a very promising prospect for the future of melodic black metal.

Now when you think of black metal bands from the top of the head, you will perhaps automatically first think of Scandinavian acts. You know, like Dissection, Necrophobic, Sacramentum, and perhaps maybe even Windir and Borknagar to a lesser extent, with album themes reminding you of those freezing cold wintery landscapes, with dark grim atmospheric settings perhaps? But those early days of black metal are pretty much all but over; now the genre has spread across all corners of the globe, reaching just about every country that has been lucky enough to be exposed to this mighty fine genre. As a result, each country seems to now have their very own underground black metal scene, so has been the case for Australia. Yes, black metal isn't just for the land of ice and snow, and this also goes for the melodic side of black metal too. After all, isn't Lucifer supposed to be surrounded by flames deep within the bowels of hell? I'm pretty sure it isn't cold in a place such as that. Anyway I'm babbling on, now on with the album in hand.

There is an overwhelming epic approach to the songwriting in this album, which hits you right away. Starting with the guitar work, it's magnificent indeed, and it's clearly that element that drives this album forward, from the super shredding solos to the highly melodic and catchy tremolo riffing. The harsh shrieking vocals and screams, although nothing out of the ordinary, match the music in just the right way, as they provide that highly passionate and sinister approach, sounding much as if he intends to keep his vocal style within the traditions of Scandinavian melodic black metal.

Each track has its own structural approach, with each one having its very own melodic riff pattern, and each song seems to have a slow build-up at the beginning, all of which lead into an aggressive ferocious tempo, with highly intense blast beats kicking in. There is the occasional experimentation thrown in too, so the album is not all necessarily straightforward, whether it be the atmospheric chanting at the beginning of "The Flaming Hordes Of Basarab", the symphonic choir at the beginning of the opening title track, or the acoustic passage of "Veni, Vidi, Vici" (not to be confused with Virgin Steele).

Simply put, For Thine Is The Kingdom Of The Flesh is as beastly as it is melodic, as melancholic as it is brutal, the riffs are highly addictive, the vocals are sinister as hell, and the lead solos will shock you to the core. To top it all, the album remains consistent, meaning no track will disappoint you. It's not entirely original, it's not exactly a work of musical genius, but it's highly recommended for those into the melodic side of black metal.