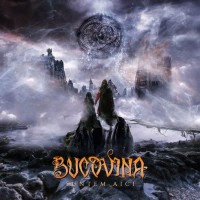 
Here's Suntem Aici, the fifth release by Bucovina, a band hailing from the beautiful and majestic lands of Romania. If traditional Romanian folk mixed with traditional heavy metal sounds like your thing, then this album could pleasantly surprise you.

The Romanians are certainly no strangers to providing us with great folk metal acts, with bands such as Negură Bunget and Dordeduh being amongst the countries most well known; however, whereas those bands are involved in the blackened side of folk, Bucovina fit themselves into a much more traditional route instead. Bucovina are perhaps most well known for their impressively overlooked debut Ceasul Aducerii Aminte, but that's not to say that the rest of their discography doesn't deserve praise either; they are fairly consistent in keeping up with providing enjoyable folk metal to us. Now, unlike their previous release Septentrion, Bucovina seem to have opted for an even more traditional heavy metal-influenced approach here on Suntem Aici; to me it seems that less emphasis has gone into those folk elements.Bucovina also deliver English lyrics in parts of the album, which is a new approach for a band that understandably prefer to use their mother tongue.

To begin with, the riffs are very striking and very melodic, but also fairly straightforward; they have a traditional-sounding approach to them whilst still possessing an epic sound and heaviness, very similar in style to Amon Amarth. This does, however, work very effectively; I mean how can the main riff on "Valea Regelui" not have you hooked in an instant? Well, if the riffs don't have you hooked, then I'm sure the catchy choruses will; the dual vocals of Florin Ţibu and Bogdan Luparul that you hear on the chorus to "Rătăcitorul" definitely had me hooked, and the opening singalong to the closing track "Folc Hevi Blec" even more so. It felt as if I were at the center of a Romanian Tavern surrounded by drunken merry men, and despite me not even being able to understand the Romanian lyrics, it still very much invited me to want to sing along.

The leads in general are nothing overly technical but are still pretty decent, and I have to say exceptional on a few occasions, with the lead solos on "Suntem Aici" and "Stahl Kennt Keinen Rost" most worth taking note of, even if they are a little high in the mix, which I did find to be only a minor issue. Now, it goes without saying that most folk bands traditionally tend to include the acoustic guitar in their music, and Suntem Aici is no exception whatsoever. The track "Rătăcitorul" includes a fine opening acoustic passage, and several other tracks also feature impressive acoustic guitar work. These Eastern European acoustic melodies clearly remind you that Bucovina are still very much a folk metal band at heart, not a heavy metal band with folk elements.

The most interesting track without a shadow of a doubt for me has to be "Cu Mândrie Port Al Meu Nume", which fascinatingly translates to "I Proudly Bear My Name In Return"; this is purely an instrumental track with hardly any folk elements involved, instead more of a traditional heavy metal-inspired track with plenty of groovy headbanging moments. These come courtesy of some highly impressive guitar work by Florin Ţibu and Bogdan Luparul, some outstanding drumming by Bogdan Mihu, and of course Jorge Augusto Coan's stunning bass lines. It's a track where each musician is able to play with total freedom, enabling each of them to shine at what they do best.

I must admit that Suntem Aici isn't one of the strongest efforts in Bucovina's discography to date, but it definitely has its moments for sure. It's more than likely that those who prefer folk metal the old school way will appreciate this more than those who prefer the modern-day standard of folk metal.