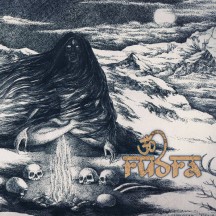 
Vedic influences in metal aren't exactly commonplace, even with bands like Cult Of Fire, Zaum, or Queen Elephantine have been taking some aesthetic and musician influences from South Asian culture. But those are all Western bands. Rudra have been doing Vedic metal for 30 years now.

Granted, Rudra are not from India, but from Singapore, a country with some significant ties to Indian culture. Southeast Asian metal has been mostly going under the radar. Sure, some bands like Rudra's countrymen in Wormrot, and Indonesia's recent-ish wave of atmospheric black metal in the form of Vallendusk and Pure Wrath, plus the oddity that is Kekal, have been getting some international attention. But the scene as a whole seems to remain underground, with a lot of it reveling in extremity, with more brutal death metal bands than though possible. However, more relevant to our discussion, there have been long-running bands like Malaysia's Hayagriva or Singapore's Impiety making black metal that is as thrashy and dirty as can be. Somewhere around this line also lies Rudra.

Formed in 1992 as more of a straight-forward blackened death band before introducing South Asian classical/folk music elements with their full length debut in 1998, having steadily made music in that vein since and now arriving at a tenth album, Rudra already have a sort of established sound. The folk elements are not overbearing, coming more in the form of compositional styles rather than extra folk instrumentation, giving some of the melodies and choirs a very odd feeling. The clean chants are the most obvious element, but the way Rudra weave melodies into the more straight-forwardly metal part of their sound still feels a bit alien in contrast. Some of it is because of cultural shock, but also something in how everything comes together feels a bit clunky, despite how intricate the songs tend to be, with all of them being in the 5-9 minutes range.

For the grittiness one could come to expect from a Southeast Asian band, Eight Mahavidyas is a pretty clean record. The sound doesn't lean to heavily into either a black, thrash or death direction, and none of them stay on the extreme sides of their respective subgenre spectrums. The riffing and the blast beats show that Rudra could've made a pretty compelling metal record even without the Vedic influences and the melodic leanings, but those tied together with the "eight female characters extending from ancient times till the 18th century who broke stereotypes and ended up being outstanding teachers of wisdom" concept, do make for a more interesting record overall.

I'm not sure how to position this in Rudra's larger discography, since the long-running Brahmavidya trilogy still feels untouchable. But somewhere in a corner of the world, Eight Mahavidyas shows Rudra still make metal their way.

Written on 26.12.2022 by
RaduP
Doesn't matter that much to me if you agree with me, as long as you checked the album out.
More reviews by RaduP ››