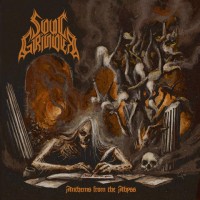 
Here's Germany's new and exciting death metal prospect Soul Grinder, introducing their second release Anthems From The Abyss. Ideal for fans of both Vader and Cannibal Corpse, this German trio have certainly had a crack at bringing you the best of both bands in one album!

Well, I think it's fair to say that this year has been overly saturated in death metal releases, with many older bands still hanging onto the death metal scene and many newer bands forming. Whilst many bands are introducing new styles of their own to the extreme genre, others opt to relive the same old school death metal approach. German metallers Soul Grinder are one of the latest additions to this long list of death metal bands to come along recently, and their approach is slightly different to a lot of bands on the scene right now. Sure, this band does bring some old school death metal elements to life, but they also mix things up a little, bringing a variety of different styles to the table as well.

This now brings me to Soul Grinder's second full-length release Anthems From The Abyss, and what does this German death metal trio bring to the table with this particular release? Off the top of my head I would probably best describe Soul Grinder as having the ferocity and grooves of Vader, blended with the brutal sound and sadistic themes of Cannibal Corpse, with a touch of symphonic thrown into the mix for good measure. All shaping up to be a solid release, you might say.

Well just as expected, this release is devastatingly heavy, equipped with hard-slamming mid-tempo riffs played in a chugging fashion from the onset, with thunderous drumming alternating between powerful blast beats and rhythmic sections. There is also a slight symphonic presence to be heard as well, this gives the album a devastating, apocalyptic edge to it. A noticeable standout for me though has to be the well executed Vader-like death growls; although nothing spectacular, they are effective as they allow the lyrics to be heard clearly, whilst at the same time maintaining that sheer brutality. These main vocals are also accompanied by some sadistic hellish death growls chanting in the background, these are done very much in a ritualistic effect, only adding that extra sinister vibe to an already brutal album.

One thing you can say for sure is that the album's structure is generally more unpredictable than your average death metal release; with noticeable tempo changes throughout, ranging from mid-tempo to the occasional upping in ferocity, keeping the listener guessing. However, there's nothing that wows me in the riffing department; I'm not a massive fan of the chugging riff style, it seems overly done to me, I have to admit. I would have preferred more variety and melody, but I guess that's me being more of a traditionalist when it comes to death metal riffing. Tracks such as the closer “Warcurse” sound as if they were inspired by the brutal hammering tone of The Bleeding era Cannibal Corpse, although the chugging lacked the catchiness to sustain my demanding interest.

I don't believe this album will win any awards when it comes to its songwriting, however some tracks have their stand-out moments. First, the ultra-groovy “Blood Harvest”, with its hellish howls and growls, catchy riffing, and brutal lyrical content taking a slice of mutilated pie from Cannibal Corpse. “Supreme Enemy” contains some epic symphonics and “Spirit's Asylum” also contains some catchy riffing, and a memorable long-fading outro, then there's the tension building drum rolls of “Soul’s Mirror”.

Overall, this album won't exactly blow your mind. It's far from classic material, but Soul Grinder have developed their own style. By taking inspiration from death metal's giants, they have managed to create their own identity amongst the rising beasts of today's death metal in this early stage.