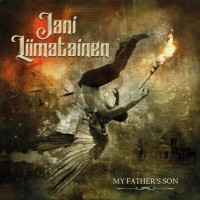 
During my active writing years, I've listened to many releases and written many reviews. I've interviewed and met some of my favorite metal stars and starlets. But none came as close to the amount of influence the following artist had on me... as a young teenager, I recall keenly listening to the fast-tempo, virtuous and energetic guitarwork he delivered at the time with Sonata Arctica. I remember being blown away by the artistry and creativity he'd put out in "My Selene" (out of Reckoning Night). It came at a time when I was starting to slowly fall in love with metal music and electric guitars, and Jani Liimatainen was the man who made me grab my very first guitar and concentrate on writing music.

Time, since, had gone by. Jani moved on to become one of Finland's most hard-working songwriters, composers and musicians. He made beautiful metal poetry with Cain's Offering and The Dark Element, and even joined the mighty Insomnium, but one thing was still missing - his own ever-so personal full-length piece. And here she is - coming in at just under an hour in total, Jani Liimatainen's debut My Father's Son is, both lyrically as well as musically, as close and personal as it'll get.

My Father's Son is, as far as I could tell, a tragic autobiography. It's written and organized in a chronological manner, sharing a piece of information with every passing track. An ever-evolving scene in a Shakespearan play, if you will. The artistic choice for how Jani wrote the lyrics of this album can be generally split into two: straightforward (tracks 2, 3, 5, 8, 9, 10) and poetic (tracks 1, 4, 6, 7). Compositionally, Jani used a variety of styles and genres that generally circle around the (you guessed it) melodic power metal sphere.

My Father's Son opens up immediately with a mid-tempo melody on "Breathing Divinity", which reflects neither optimisim nor pessimism, with lyrics that showcase our mutual pondering over life and what it may bring. The atmosphere of this track perfectly resonates towards what is due to follow afterwards in the album, as at the 3:50 mark, the mood shifts sour and melancholy is first introduced to what will ultimately be a mostly lamentable collection of tracks. Track number two, "All Dreams Are Born To Die", is a faster power metal composition compared to the prior. In a similar vein to the course of life itself, being born into the unknown is followed by two important chapters in life: childhood and adolescence. Here is where Jani Liimatainen first shares his experiences within an unliked-minded community as a growing youth, and his struggle with fitting in and experiencing love and warmth from his peers.

While the entirety of My Father's Son is a beautiful collection of songs, there are a few that immediately stood out to me, both lyrically and musically. "What Do You Want" was the first to do so. It too revolves around adolescence, perhaps even early adulthood, as we're finally introduced to somebody who had a great importance in Jani's life. Presumably, a romantic partner who is told to have left a stain on Jani's trust, as the two separated and an unwanted toxicity stood on the footsteps of what was once a beautiful relationship, thus escalating his tragic upbringing. The following track, "Who Are We", is the peak of [band]Jani Liimatainen[/b]'s poetic parable. It is a slow-paced piano-based story of life seemingly falling apart, with a creeping allusion to society as a whole.

One can really never know to which direction Jani Liimatainen is going to take his music next on My Father's Song, but as "Side By Side" shows, even a happier, lighter-spirited discoesque track can find itself among his brainstormings, leaving no shortage of variety of genres in My Father's Son. This one is an intriguing one, being the most optimistic and euphoric track of the lot, comfortably placed in the dead center of the album. In "Side By Side", we're faced by a surge of euphoric romaticism, most sharply, but not solely, indicated by the slow and seducing saxophone solo contributed by Janne Huttunen. It seems as if nothing can tear up the walls of joy, shared by a young man's vivid love, or so it seems...

"The Music Box" was a work in progress since the mid 2000s, and never received the full-scale release it required until the release of My Father's Son. This poetic piece describes a frail man's endeavours with loneliness, heartbreak and wear, as we're once again introduced to a certain autobiographic indication with a remark in the form of "...and this tired old man is me". This track perhaps has the best take-home message in the entire album - despite the challanges we all face inwards and outwards, one can shine through and prosper. It is the last track that got to me on a personal level, but it is the most meaningful one at hand. Musically, we get a large and enthralling composition, mostly led by a melodious piano. "Into The Fray" sees a crisis in Jani's romantic life impeding his route to grace. It is a faster track containing a more assertive orchestration. This struggle is lost, however, and the resolution comes in the shape of the next track in line, "I Could Stop Now", claiming he doesn't belong where he was, asserting that he's not willing to pretend nor lie about love, if it's not there. Musically, I feel like this track could be a suitable excellent-quality Eurovision entry for Finland (a guilty pleasure of mine, I admit), had it been slightly shorter in length and had Jani Liimatainen shared such ambitions. Track number nine, however, sees a sharp shift in tempo, atmosphere and lyrical vision. This could well be the most intimate Jani Liimatainen has been with his listeners, as "Haunted House" is the single track in the album where he takes vocal duties upon himself. The song strikes me as hauntingly literal, as it reveals a scene where Jani's child and partner are now gone, and left the house, ever-so-literally, empty. He doesn't sing nor speak in the song, and appears to be mostly tormented vocally. They say the ones who are generally cynical are tormented souls, and by griveing experiencing "Haunted House", I deeply believe in such claim.

My Father's Son concludes with the self-titled 11:32 minute-long opus, which in its entirety revolves around a single melody, while the lyrics can be broken down to three stages. The first stage, which I'll refer to as "The Denial", introduces us to Jani Liimatainen's father, who failed (or didn't seem to want) to raise his child, tragically becoming a stranger to his own son. Bound by his desire to turn the tides, Jani promises to himself he would be a different, better father than his own. The reprise ends with the question "Am I my father's son?", hindering a sense of shock and distrust over his own fatherhood. The second stage can be referred to as "The Realisation", as the melody and reprise circle back with the resentful stance Jani showers upon his father, concluding with "I'm bound into his fate... I am my father's son". This stage runs for a lengthier period of time, as he slowly realises and comes to terms with the fact that he's been no better to his own child than his father was to him, questioning whether he was destined for this behaviour. After a delicious melodic transition, phase three, "The Guilt", descends. A slower and more melodramatic atmosphere is presented, and the father is on his deathbed. This is where Jani is anguishly guilt-ridden, and forgives his father for how he was raised. He comes to terms with the fact that he is, indeed, his father's son, thus bringing the album to its sorrowful end. Strangely enough, he refers to himself in past tense, suggesting the circle of abandonment and foreignity will carry on in the family's dire legacy.

My Father's Son is an unbelievely personal record, for sure - especially coming from the relatively distant and private artist that Jani normally is. It seems his time apart from his old mates at Sonata Arctica and the following collective experiences led Liimatainen to take a more open approach. It was during this time he opened a personal blog, social media accounts (some of which are still relatively upkept), and seemed to have matured up to the point where privacy can be both maintained inwards and presented outwards.

Despite having effectively retired from reviewing records, this is a record I knew I'd have to review one day. I just hope Jani knows how appreciative and moved his fanbase is following a record such as this. Truly a one-of-a-kind piece.