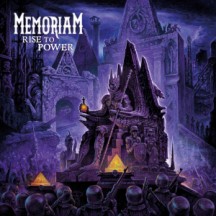 
Omne, I hear you ask, if a car was travelling west from Ipswich at 25 mph at 15:23 and a train left Cardiff Station travelling east at 67 mph, what time would dinner be?

Well, let me explain that by saying that it surprises me that Memoriam are already on their fifth album, with the band constantly plugging away since their inception, even if they are sometimes overlooked in the sea of death metal. Rise To Power cements all their hard work and acts as a concrete reminder (if one was ever needed) that old school death metal is still a vibrant and violent genre.

Rise To Power is a powerful affirmation that Memoriam are no mere faces in the crowd, but at the forefront of a scene each member have helped shaped throughout their individual careers. No mere collection of veterans, Memoriam are more than just a sum of their parts; they are a group who still have a point to prove, and in Rise To Power, it's a powerful one at that.

Rise To Power is the band's most adventurous collection of work to date, spurning the instantly catchy approach of Requiem For Mankind and the bulldozer style of For The Fallen, for a more ambitious sound. Tracks like "The Conflict Is Within" are a melding pot of ideas that combines the band's prior rough, fuzz tone with instrumental flair, melodic breaks and twists that make the songs within a powerful statement of intent.

The drum work on "Never Forget, Never Again (6 Million Dead)" is tight yet not constrained, free flowing with fills thrown in for fun, both for Smith and the listener. It is these little details, like on the break on "Total War", that makes Smith the difference maker on Rise To Power, being a central part in making the album more than standard, though high-quality, death metal fare.

The rest of the band are by no means passengers rumbling away behind Smith, for Fairfax raises his game in tandem, combining his fuzz tone delivery with melodic breaks and technical passages as highlighted on "Annihilation's Dawn". Willets is yet again old faithful, ensuring the band's blunt old school style still remains central to Memoriam's sound, and enabling the rest of the band to experiment around him as he strengthens the ties to the band's roots.

This ambitious gamble does have its drawbacks, with "All Is Lost" sounding more pedestrian and lacking spark compared to the rest of the album, which is unfortunately compounded by the songs surrounding it. While it is the weak link, it is still welded together well, so won't be too steep a drop in quality for listeners.

Old school is back in session and I hope you've done your homework.

Written on 24.01.2023 by
omne metallum
Just because I don't care doesn't mean I'm not listening.
More reviews by omne metallum ››