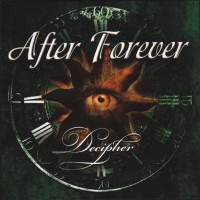 
The sophomore release from gothic "metallers" After Forever is here, the debut Prison of Desire already had been a killer, but Decipher can hardly be put into words anymore!! After a very dark intro ['Ex Cathedra'] filled with violins and some choirs [After Forever use real classical musicians - violins, cellos, oboe, choir, and so on -], 'Monolith of Doubt' starts things out, the moment I heard the angelic voice of Floor Jansen I Knew that I was in love... but not everything is angelic.... the heavy guitars, the double bass and the growling/screaming voice of the male singers give perfect equilibrium, you're now listening an eternal fight the angel versus the demon!

The rest of the album is great too! With killer tracks like 'Emphasis', driven by heavy guitars and mid-paced double-bass, which are in contrast to the atmospheric keyboards and strings, 'My Pledge of Allegiance #2', which is one of the best tracks in the cd, perfectly alternating the atmospheric parts with the soprano vocals, and the heavy ones with black/death vocals, 'The Key' convinces with its variable song-structure. The closer 'Forlorn Hope', which features a Rabin speech at the end of the song, before some beautiful choirs wrap things up.

With all those gothic bands nowadays trying to copycat established acts like The Gathering and Tristania, After Forever is a breath of fresh air in the genre.
Written by Undercraft | 26.08.2003