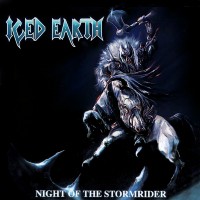 
Back in the early 90's, in 1992 to be precise. The American band Iced Earth released their first concept album entitled Night Of The Stormrider. Reactions were very positive because their sound was different from any other band in the metal scene. For numerous fans, the discovery of Iced Earth started with that dark epic album, mystic lyrics and gloomy cover art. Night Of The Stormrider followed 1990's self-titled debut album and was received with immediate success in Europe and at a degree lower in the States. Japan was charmed too, which in 1992, was less common than nowadays, and by the way, that record is still the most sold of all Iced Earth's albums in Japan. So, what do we have with the CD you ask? Well, let's see!

First, I want to point out that Matt Barlow wasn't yet the singer of the band and logically, it makes a huge difference between Night Of The Stormrider and The Dark Saga for example. But hey, this singer John Greely has a totally different style [closer to Rob Halford than anyone else I've heard so far on some parts] and it's quite unfair to try to compare his voice with Matt Barlow's. Anyway, if you're ready to hear Iced Earth with a higher singer, that won't bother you at all. And if not, you'll end up liking John Greely's voice.

Concerning the line-up, John Schaffer, of course, handled both rhythm guitar and part of the vocals [as usual] while John Greely was the main singer. The line-up was completed by Randy Shawver [lead guitar], Dave Abell [bass] and Richey Secchiari [drums].

Night Of The Stormrider opens with 'Angels Holocaust', one of the best Iced Earth's compositions ever. The track opens with desperate angelic voices [sampled on keyboards] and then the guitar kicks in. It's a classic! You already know that you can't dislike that album. The chorus "Fear the angels holocaust, they're screaaaaaaaaming!" will haunt you for days, weeks, years... But positive haunting, don't be scared! Another unusual element on that album, the use of keyboards is quite recurrent, and it add some mysticism to the songs while enhancing some choruses.

The duo of songs composed by 'Stormrider' and 'The Path I Choose' is absolutely mind-blowing and more aggressive than 'Angels Holocaust'. The ones who know Alive In Athens, can already acknowledge that these two songs work perfectly together. By the way, if you get Alive In Athens, you will get 6 of the 9 songs from Night Of The Stormrider! But quite different of course, so Night Of The Stormrider is still really worth listening to.

'Before The Vision' is both a short acoustic introduction to 'Mystical End' and a break in the tracklist. When I was talking about the mysticism of that record, well, with that track we are in the core of the subject. 'Mystical End' is the only "real" song [meaning over 2 minutes] from that album, which was not played during the Alive In Athens sessions. That's a very good song, it reminds me of 'Colors' from their first effort [the famous album Iced Earth].

'Desert Rain' is also a terrific song, with its Arabic sounding guitar riffs and a powerful rhythm. On that one, John Greely obviously sang in a different style, in fact, close to... Matt Barlow! Really, what I like to call "the darkest side of Night Of The Stormrider" ['Desert Rain', 'Pure Evil' and 'Travel In Stygian'] is something else! 'Pure Evil' is one of my favorite Iced Earth's anthems with all these rhythm changes and a "in your face" chorus. But that's a piece of cake compared to my all time favorite song for its rhythm: the closer 'Travel In Stygian'. By the way, 'Reaching The End' is also a short acoustic introduction, and was not really necessary in my opinion...

'Travel In Stygian' is a masterpiece by itself and even if the sound of the drums is not as clean as on the Alive In Athens' version, it's still amazing for being from the early 90's. Now, I want you to discover that song as it deserves to be: wait till dawn, light a candle, close your eyes and push play [for best results, use full volume]. That's all I'm going to said about it. Enjoy!

Despite the old recording sound, the old fashion voice of the singer and a couple of low interest acoustic tracks, Night Of The Stormrider is a true metal masterpiece. 'Angels Holocaust', 'Desert Rain', 'Pure Evil' and overall 'Travel In Stygian' are revealing Jon Schaffer as one of the best compositors ever born. Now, as usual, for a review about any Iced Earth's CD, you may want to get Alive In Athens first as it contains almost the entire album played on stage and the sound is better. Or, of course, you can get the Dark Genesis box-set, including a 2001's re-mixed and re-mastered version of the album. And believe me, the sound is a lot better, especially guitars and drums [well, that's a difference of 10 years of studio experience!!]. Nevertheless, the original release has a darker atmosphere that is partially gone on the 2001's version. So, I let you free to make up your mind about which one to get, but I still prefer the original release.

Written on 18.09.2003 by
Dream Taster
Bringing you reviews of quality music and interesting questions such as: